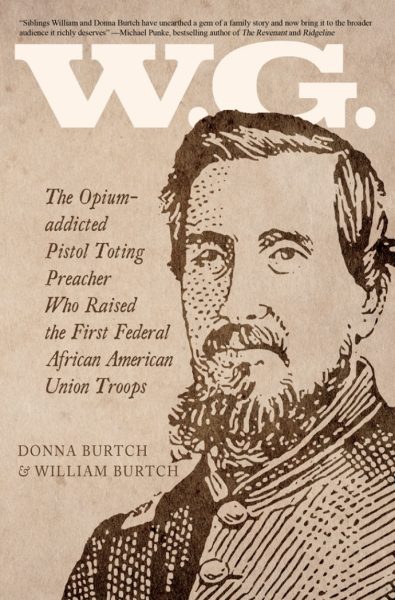 William Gould “W.G.” Raymond was a staunch abolitionist and Union Army officer. A preacher. Under President Lincoln’s authority, he recruited hundreds of Black Union soldiers on the wild streets of Washington, D.C., eager to fight for their freedom. Many would go on to battle in perhaps the most important victory for Black troops in the Civil War. The War Department did not support the fledgling 1st District of Columbia Colored Volunteers (Later the 1st USCT). W.G. was forced to pay for troop provisions and training out of his own pocket, never to be repaid. His challenges were just beginning. Now available in time for the USCT Juneteenth Celebration 2022.

Get This Non Fiction Book.

Donna Burtch is an American writer and poet. Her early life involved moves throughout and across the United States. Books and reading smoothed the transitions.

She settled in central Ohio in 1976, where she graduated from Ohio Wesleyan University and completed graduate studies at The Methodist Theological School in Ohio. Donna worked for several decades in marketing and fund-raising for firms, not-for-profits, and universities.

In 2011 she committed to National Novel Writing Month (NaNoWriMo). Ten years later she self-published her work as a biography of her late father’s life, In the Key of Sea the Life & Times of William A. Burtch.

She and her family live in Columbus, Ohio.

Following a childhood that spanned the Allegheny Mountains of northwestern Pennsylvania to the sprawl of Los Angeles County, he has lived in central Ohio since his teen years. After graduate school at Miami University of Ohio, he worked many years in the investment business before he began writing. His work often gravitates toward the experiences and struggles of the rural characters he grew up around, as well as themes of survival in a culture of addiction.

His cherished late wife, Kari, lived courageously with ovarian cancer for three and a half years. She was selfless and inspirational and taught him about living. She gifted him with perspective.