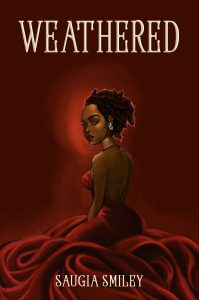 From Author of the Empowered Series, comes another explosive novel that will leave you breathless. Weathered is a steamy summer romance that will send your heart into overdrive.

Cyrena Grant is a 25-year-old Black woman who has already been through many storms in her short life. After landing her dream job at a top Publishing House in Houston, she had spent the last 3 years meticulously building a successful career as the youngest Senior Illustrator in her company’s history. Now, everything she worked so hard for is being threatened by Carmo Anthas, the new interim CEO. As if that wasn’t bad enough, the explosive chemistry between them is undeniable.

Carmo Anthas is one of Italy’s most eligible bachelors. He is the youngest son of multi-billionaire Jonathan Anthas. He’s proud of his reputation as a playboy. That is until he meets the Ice Queen that is Cyrena Grant. She is like no woman he’s ever met before and threatens to tear down the walls he so carefully built around his heart.

Little did they know that in the midst of a hurricane, the likes of which Texas had never seen before, Cyrena’s past would come thundering back followed by lightning strikes that can be described as a series of unfortunate events. Topped off by a serial killer stalking her every move.

Buffeted by the mind bending winds of work and personal drama coupled with the deluge of Carmo’s romantic advances, the question isn’t if Cyrena can, but does she want to…weather another storm?

Author Bio:
Saugia Smiley is an African Caribbean author. She was born and raised in St. Ann's Bay, Jamaica. Saugia moved to the United States during her teen years and for 6 years called Boston, MA home until putting down roots in Houston, TX. She is an avid traveler who worked for a major airline for years before dedicating herself solely to writing. Her writings are loosely based on her childhood, life experiences, and vivid imagination. Saugia is driven by a passion to see more publications that feature dark skinned people in leading roles. Her life’s motto is, "just because it has never been done before does not mean it should not be done."