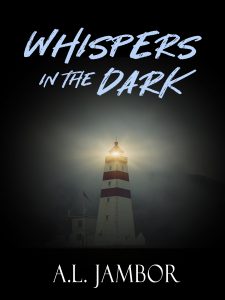 Whispers in the Dark by A.L. Jambor

Marigold Burnside sees ghosts. She began seeing them when she went to Cape Alden, New Jersey, to investigate an unsolved murder for a TV show called “Historical Homicides.” After her car collides with Phil Curry’s during a snowstorm, Mari suffers from head trauma. When she comes out of a coma, her encounters with the deceased begin.

Mari accepts an invitation from a kindly nurse who offers Mari the use of her garage apartment until Mari gets back on her feet. Five months pass and Mari is having trouble breaking out of a depression that keeps her from reclaiming her life, but then Celia Morton comes to visit Mari.
The mystery that brought Mari to Cape Alden revolves around a young, pregnant woman named Charlotte Johnson, who was brutally murdered in 1941. Her unborn child was never found. The person accused of killing Charlotte is none other than Celia Morton, and her visits to Mari renew her interest in the investigation.

Celia is also visiting Phil Curry. His life is in a downward spiral following the accident. Celia’s presence spooks Phil, and when he finds out that Mari is seeing her, too, Phil agrees to meet with her. Mari believes that Celia is innocent of the murder and wants them to clear her name. Mari’s exuberance is overwhelming to the introverted Phil. Still, they learn to appreciate each other’s strengths and, after a rocky start, begin to work together in earnest.

Mari starts digging into Charlotte Johnson’s past to find out how the shy girl from Pennsylvania ended up on the Jersey shore. She discovers that Charlotte was an orphan who married a boy she grew up with. He took Charlotte to Cape Alden when he accepted a job working for the local railroad. When he dies, Charlotte is left alone in the little cottage on the beach supplied by the railroad for its employees.

Things turn sour for Charlotte when she becomes pregnant. She is unmarried and disliked by the people in town who think she is a slut. Mari discovers that Charlotte’s only friend is a man named Jack, a vagabond who visits the small beach town from time to time. Was he the baby’s father?

Mari’s new ability to see ghosts gives her a unique view into Charlotte’s world, but the visions are short, and the murderer remains a mystery. As Mari gets too close to the truth, a near-death experience almost sets her back, and despite Phil’s warnings to back off, Mari can’t give up until both Celia and Charlotte can rest in peace.

“Whispers in the Dark was previously published as What She Deserved.”

Author Bio:
A.L. Jambor’s parents met in Point Pleasant, New Jersey, when their families stayed in rented bungalows at the shore. Amy’s fondest memories include taking a roll of pennies into the arcades that lined the boardwalk in Point Pleasant and playing skeeball for hours. She loved the beach, so it’s no wonder that so many of her books take place near the Atlantic Ocean.

After raising two boys, Amy and her husband, Hans, moved to Florida. She didn’t start writing until she was well over fifty when Amy began a story about a young girl left on her own when the entire continent of North America is devastated by the release of a biological weapon. A friend read the first chapter and encouraged Amy to continue writing. The result was her first novel, But the Children Survived. Amy followed But the Children Survived with “shorts” about haunted houses and a divine detective named Nick Dandino.

Amy is an avid dog and cat lover, and she supports the abolition of puppy mills. Her dog, Trixie, inspired her to write a series about a psychic dog named Libby, who embodies the spirit of a World War I soldier named Lord Percival Plep. As Libby, Percival solves mysteries that take place in an over fifty mobile home park in Florida.