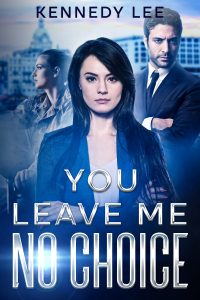 About You Leave Me No Choice by Kennedy Lee

Parker Clary is a woman on a mission to destroy crime family operations in Savannah, Georgia, and to take out the man at the top. Working as an assistant district attorney and undercover with the FBI, she draws the attention of the city’s most influential and attractive attorney who wants her as well as to help her for his own reasons. While neither of them wants a relationship, they can’t help but be drawn to each other.

Author Bio:
Kennedy Lee is originally from Savannah and the author of five well received books on the history of the coastal south. She finds creative writing freeing and enjoys letting her imagination soar to create intriguing characters in books that have been called 'page turners'. As an editor who received many Georgia Press Association awards for her column, section, series and photographs, she now enjoys creative writing in settings of the coast that she loves.