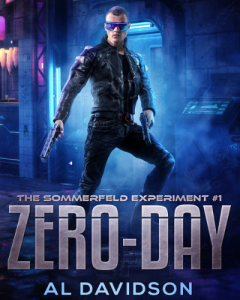 About Zero-Day: The Sommerfeld Experiment #1 by Al Davidson

Covert cyborg agents from an expansion of Area 51. An insane neuroscientist. A kidnapped superhuman lost to memory until now.

These questions have plagued Joshua since childhood. Mysterious amplified senses and boosted reflexes have helped him survive and thrive in a brutal, lawless megacity, and he leads the notorious Epitaph gang with keen street instincts.

When Joshua’s unexplained abilities draw the attention of a covert government entity, he finds himself on the run. Only his skills, street smarts and a rogue hacker named Shelby keep him one step ahead of his relentless hunters.

They know what he is. They know who he is, and they will tear apart a megacity, placing everyone he cares for in danger, to bring him in.

Author Bio:
I am a full time writer who lives on a small ranch in the mountains in California with two dogs, Buttercup and Mojo, and family. My dogs would prefer I spend more time throwing balls and hiking than writing.

Early in my writing career I was a screenwriter and managed to win an honorable mention and a few quarter finalist spots for a thriller screenplay I wrote called Plan B. I also had a paranormal action adventure screenplay called Catching Hell shopped around Hollywood by two producers. Catching Hell will be out in novel form later this fall.

I’m a fan of comic books, action movies, graphic and action adventure thriller novels and they have a big influence on what I enjoy writing. My mom was an early influence by giving me books she enjoyed as a kid like Rafael Sabatini “Captain Blood” and “The Sea Hawk”, along with Alexander Dumas’ “Three Musketeers”, “Count of Monte Cristo” (my favorite), and “The Man in the Iron Mask”, along with everything Edger Rice Borroughs wrote like Tarzan and John Carter of Mars. Being the cool mom, she also gave me a stack of Robert E. Howard novels, so I grew up on Solomon Kane and Conan the Barbarian.

In my spare time I like playing MMOs, adventure travel, camping, road trips on forgotten roads and byways. And I read. A lot.

My current series, a action thriller cyberpunk that’s like a mashup of Blade Runner and John Wick, came to me in a dream. Chapter 22 “Sombras” was the dream and I built up the story around that. I plan to write four in the series and two, Zero-Day and Gauntlet, are on Amazon.