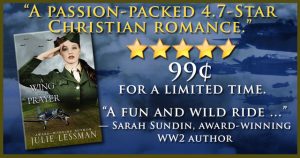 About A Wing and a Prayer

NOTE! THIS BOOK IS A SWEET INSPIRATIONAL ROMANCE WITH A HIGHER LEVEL OF ROMANTIC PASSION)

She’s dead-set on giving everything to the war overseas …

Even if it means losing everything in a war of the heart.

A street orphan abused and abandoned by an alcoholic father at age five, Gabriella (Gabe) O’Connor has never let a man stand in her way yet. So when a handsome flight officer thwarts her plans to become a WASP— Women Air Force Service Pilot — she’s determined to join the war effort anyway she can. Her chance comes when she “borrows” foreign correspondent credentials from the Boston Herald—where her father is the editor—to stow away on a medical ship to the front.

Lieutenant Alex Kincaid pegs Gabe O’Connor as trouble the moment she steps foot on Avenger Field as a WASP cadet. As the eldest brother of a boy whose jaw Gabe broke in grade school, Alex is familiar with her reputation as both a charismatic ringleader and a headstrong hooligan who’s challenged every male and nun from grade school to college. As her WASP flight instructor, Alex eventually expels Gabe when she pulls a dangerous stunt. But when he is an evacuation pilot in France eight months later, their lives intertwine once again, exposing them to a danger as perilous as the German tanks roaming the Reichswald Forest: a love that neither expects.

Author Bio:
Julie Lessman is an award-winning author whose tagline “Passion With a Purpose” underscores her passion for both God and romance. A lover of all things Irish, she enjoys writing close-knit Irish family sagas that evolve into 3-D love stories: the hero, the heroine, and the God that brings them together.