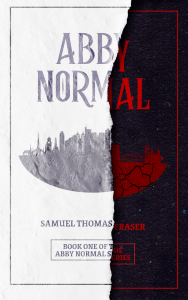 Abby Henderson has lived her whole life under a dark cloud. When she was born, a demon called the Deacon claimed her family as his property. When she turned 13, she was traumatized by an ominous psychic vision. When she turned 14, her dad had a psychotic breakdown and tried to kill her.She’s just turned 25, and now people are dying all around her.This is all according to the Deacon’s plan. He believes that Abby is the key to a ritual that will unleash an ancient evil on the world, and he will stop at nothing to make sure that ritual succeeds. Now, Abby is in the fight of her life against an enemy that defies all reason. Together with her pious girlfriend, her magic-slinging ex-teacher, and a hotheaded Amazon with a machete, Abby will have to use every trick in the book to outlast the Deacon. Because if she can’t, her next birthday is going to be Hell.

Author Bio:
Samuel Thomas Fraser is a writer and actor from the rainy mountains of Vancouver, BC, Canada. A lover of medieval literature and truly weird fiction, Sam holds a BA in English and a Certificate in Creative Writing from Simon Fraser University and is currently pursuing his MA at the University of British Columbia Okanagan. Sam’s novels are available for purchase on Amazon and his short fiction and poetry has appeared in outlets including Cosmic Horror Monthly and Night Terrors, Volume 5. As a performer, he has inhabited such memorable stage roles as Algernon Moncrieff in The Importance of Being Earnest and Charlie Cowell in The Music Man.