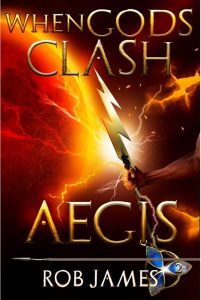 About AEGIS: (When Gods Clash Book 2.) by Rob James

Free from 14th Jan to 15th Jan. New release.
Angus MacDonald’s trials continue as threats to Earth approach the breaking point and danger mounts.
He stands alone, chosen by the universe for a great destiny. Prepared by the ancient gods of Greece, he continues the brutal fight against unworldly deities. With Earth’s defenses failing, and loved ones lost, his prospects falter. Then his visions of humankind’s future shatter when he learns the truth of the powers he confronts. The truth is it isn’t only Hades, as mentioned by the Gods of mythology, but many.
When he recalled the Olympian’s instructions on the blood-soaked Culloden Battlefield in Scotland, they were clear. This vicious invasion, though, and the threat to human survival are beyond his imaginings.
Reeling under this fate, can he hold his sanity and survive?
New weapons provide hope, but better. Angus arms himself with love from Jessica, his teammate, and his family. Love is stronger than any weapon, the universe told him, so he fights with passion. Then tragedy strikes.
WHEN GODS CLASH, AEGIS, carries this paranormal thriller series to fresh heights. A momentous saga of struggle, with its hero, pitted against an overwhelming enemy, twists turn each chapter on end.

Author Bio:
Rob James is a student of history and geopolitics, and writing novels with a historical theme is his passion. Dramatic events and tales from history help to create thrills and suspense. They also color a flawed but compelling protagonist, Angus MacDonald in AEGIS.
Since childhood, stories of Rob Roy MacGregor, and the ancient Greek heroes heightened Rob’s passion for reading. He knows them and the history of their times intimately, lighting the richly layered backstory of his novels. The series ties together ancient days with the modern and is rooted in present-day Washington, D.C., and Scotland.