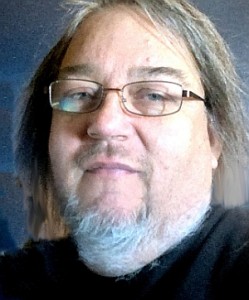 Tell us about yourself and how many books you have written.
I’m a resident of South Dakota; I grew up in Oklahoma, however, and didn’t start writing seriously until 2009. I have published six books of my own, including a science fiction trilogy called The Gatespace Trilogy, and two books of essays and other short pieces. I have also edited five short story collections thus far, working with a great group of authors, about 40 at this point and growing, with plans for the anthologies to continue on a quarterly basis.

What is the name of your latest book and what inspired it?
The most recent release is a science fiction short story anthology entitled PLAN 559 FROM OUTER SPACE. It’s a collection of ten stories by ten different authors, including myself.

Do you have any unusual writing habits?
At times if I get an idea and I am out of pocket, I will text the story idea to my e-mail address so I’ll find it later.

What authors, or books have influenced you?
Some of my favorite authors are Stephen King, Roger Zelazny, Piers Anthony, Robert A. Heinlein, but as far as science fiction is concerned, I probably owe more to actual science writers, especially people who wrote about the universe; Carl Sagan, Steven Hawking, Philip C. Plait, and the two men I worship as gods of science, Michio Kaku and Neil deGrasse Tyson.

What are you working on now?
As usual, I have several projects that I am juggling; a brand new one just begun that is tentatively titled HERE THERE BE GIANTS, set in the Gatespace universe, that is, the same world as my trilogy; there’s a supernatural sort of ghost story thing that I’ve had in the works for several months, and then there’s two or three others… there’s always two or three others. 😉

What is your best method or website when it comes to promoting your books?
I have a whole list of promo sites that I submit to. It’s a full-time job.

Do you have any advice for new authors?
Read, read, read. Then write, write, write. And make sure you get an editor.

What is the best advice you have ever heard?
“Nobody ever became a writer just by wanting to be one. If you have anything to say, anything you feel nobody has ever said before, you have got to feel it so desperately that you will find some way to say it that nobody has ever found before, so that the thing you have to say and the way of saying it blend as one matter—as indissolubly as if they were conceived together.” — F. Scott Fitzgerald

What are you reading now?
I just bought “Bad Astronomy” by Philip C. Plait. I can’t wait to dive into it.

What’s next for you as a writer?
I just established a new quarterly schedule for my short story anthologies. And let me say that if any of your readers are authors who would like to participate, they can reach me on Facebook.

If you were going to be stranded on a desert island and allowed to take 3 or 4 books with you what books would you bring?
Wow. I would just say “My Kindle,” but that would be cheating, plus the battery would die. Let’s see:

“The Stand” by Stephen King.
“The Hobbit” by Tolkien.
“The Journey of Crazy Horse” by Joseph Marshall III.
And the complete works of Shakespeare.