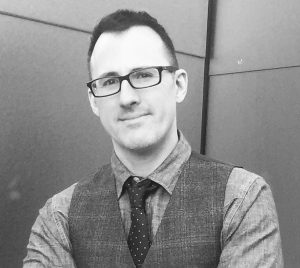 Tell us about yourself and how many books you have written.
Hi everyone! My name is Andrew, and I’ve worked in the entertainment industry for over a decade as a post supervisor, story producer, and writer. I was born and raised in New Jersey, where I grew up on a steady diet of James Bond movies, comic books, and action-adventure TV shows like Mission Impossible, The A-Team and The X-Files. I’ve written several screenplays, some comic books, and tons of promotional material. I was also a writer on the Youtube Red show Fight of the Living Dead. But this year, I got serious about writing my own fiction, and I completed two books in the Thomas Caine series.

What is the name of your latest book and what inspired it?
My latest book is Devil’s Due. Although I published it first, I actually wrote it after Tokyo Black, which launches this summer. Since it’s a novella, I was able to get it edited and published quickly, and I released it first. I wanted to give early readers a little taste of the Thomas Caine character. Since the book is a prequel, I thought it would be interesting to take the character of betrayed assassin Thomas Caine, and show an incident that influenced his development. Maybe it will give readers some insight into his state of mind at the start of the upcoming novel. Plus, it’s got exotic locations, gunfights, martial arts, explosions… what’s not to like?

Do you have any unusual writing habits?
Although I mostly write at home, so far I have finished both books in the series at a small coffee shop in Koreatown. I think from now on I;m going to have to make that a tradition!

What authors, or books have influenced you?
Too many to name! I’ve always been a big reader, but some have pointed out Ian Fleming, Raymond Chandler, Steven King and William Gibson as influences. And they’re right, I definitely read and love all those authors!

What are you working on now?
I’ve just begun the next Thomas Caine thriller, Red Phoenix. This time, Caine travels to China, and must choose between his quest for vengeance against the man that betrayed him, and keeping a promise to an old friend.

What is your best method or website when it comes to promoting your books?
I’ve just begun to dive into marketing, and the business side of my fiction. So far I’ve had good luck with Facebook ads and Twitter, but I’m thrilled to be working with sites like Awesome Gang, that connect directly to excited readers. It’s gratifying to know that readers are out there, and I look forward to meeting as many of them as I can!

Do you have any advice for new authors?
Find what works for you. There are so many different ways to write… fast, slow, quick spurts or long sessions, Plotter, Pantser. If one method isn’t working for you, change it up! Try something different. There’s no right or wrong way to do it, there’s only the right or wrong way for you.

What is the best advice you have ever heard?
I’m always reminded of the story Steven King tells, about how he threw away the first few pages of Carrie. He didn’t think it was any good. The fact is, there’s no way to know until it’s finished. So finish! Odds are, if you think it’s bad, it’s probably better than you think it is. And if it is bad, then you’ve learned something, and the next one will be better. Finish!

What are you reading now?
Dance, Dance, Dance by Haruki Murakami (one of my all time favorite books), The Dark Arts by Edward Follis, Launch to Market by Chris Fox.

What’s next for you as a writer?
I have ideas for at least two more books in the Thomas Caine series, as well as other genres and characters I’d love to write about. I’m also in the process of producing an audiobook of Devil’s Due, which is very exciting! It’s a completely different experience to hear your words read aloud by a trained narrator. I hope readers love it!

If you were going to be stranded on a desert island and allowed to take 3 or 4 books with you what books would you bring?
Dance, Dance, Dance (told you I love it!), From Russia With Love, Neuromancer, Hitchhiker’s Guide to the Galaxy, The Stand (OK, I cheated, that’s five.)