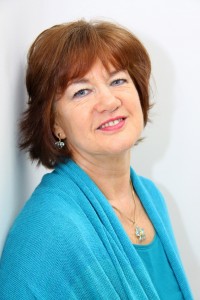 Tell us about yourself and how many books you have written.
Hi, lovely people!

I’m a Brit, living in Devon, England and by profession I’m a psychotherapist. I’ve always had the ‘itch’ to write and started my first novel, Dangerous Waters, about 7 years ago. It was finally published last year (2012). A romantic mystery, it’s set on the beautiful island of Guernsey, near the French coast, and where I spent many happy years. I even managed to leave one son behind to ensure a valid reason for frequent returns:)

As a single mother of three, there was never any time to write as well as earn a living, but now my nest is empty I’ve taken to writing full-time and my second novel was published October 2013.

What is the name of your latest book and what inspired it?
Finding Mother, a romance/family drama, is the second book I’ve set on Guernsey. It was inspired by reading an article about a man who traced his birth mother and the impact it had on everyone’s lives. I played around with this premise and came up with a young woman, Nicole, whose marriage hits the rocks, prompting the search for her natural mother with the aim of learning more about herself.

Her arrival on Guernsey opens the proverbial Pandora’s box as long-buried family secrets are revealed. The stories of the other women involved are shown alongside that of Nicole and her search for truth and love. Although the story is contemporary, there’s also a reference to the Second World War and a character’s wartime experiences.

Do you have any unusual writing habits?
What counts as unusual?! I only know that I find it hard to write just anywhere and need to be comfortable and in a reasonably peaceful space. I’ve no idea how writers can write in noisy places like coffee shops. It’s probably down to my poor concentration these days – I’m easily distracted – and need to keep off the internet if I’m to get any work done.

Until a few months ago I always wrote first in longhand, but then I developed arthritis in my thumbs which made that very painful and had to undergo an operation. Typing was less of a problem so I’m now typing my first draft instead of handwriting it. A shame, because I enjoyed the process of holding a pen!

What authors, or books have influenced you?
It’s hard to say as I’m sure a lot of what I’ve read over the years has had a subliminal influence. I have eclectic taste, veering from pure romance when I was, ahem, younger, to suspense, thriller, mystery and historical fiction. Authors I’ve enjoyed include Mary Higgins Clark, Robert Goddard, Joanna Trollope, Maeve Binchy and Erica James.

What are you working on now?
My third ‘Guernsey’ novel, called ‘The Retreat’, which is a romantic mystery like my first book, Dangerous Waters. The mystery involves the deaths of two people about 70 years apart but share a link. The action centres around a Natural Health Centre newly set up in Guernsey which offers the key to these deaths.

What is your best method or website when it comes to promoting your books?
I’ve used a bit of a scatter-gun approach in the past and haven’t singled out one overriding method. Something I need to work on! All I can say is that the best results I had for a promotion on Dangerous Waters, when I reduced the price to 99c, was through using BookBub.

Do you have any advice for new authors?
Although it now seems easier than ever to have a book ‘out there’, it’s extremely difficult to get noticed. We’re mostly minnows in an ocean of giants – big listers. Write because you enjoy it and want others to read your words, but allow for the fact that you may not become a bestseller. Or not with the first book or two! Promotion plays a key part for any new author and is essential, but time-consuming. But the pleasure a writer gets from seeing their work published cannot be underestimated. It’s a great feeling 🙂

What is the best advice you have ever heard?
That in order to be a successful author you have to keep writing. In other words, the more books you have published, the better. So, I’m writing on . . . . .

What are you reading now?
Murder at The Maples, a lovely cozy mystery by a new British author, Joanne Phillips. I love her characters and that there’s little violence – makes a nice change these days.

What’s next for you as a writer?
Well, once I’ve finished my third book it will be onto my fourth! In the meantime, I’ll be spending a lot of time spreading myself around a bit, connecting up with fellow writers and readers and learning as much as I can about this wonderful process called writing. And having some fun along the way:)

What is your favorite book of all time?
The Quincunx by Charles Palliser. It’s set in late Victorian times and has shades of Trollope and Dickens. Very complex, full of intricate characters, and a fascinating read. I felt totally lost after I’d finished it.