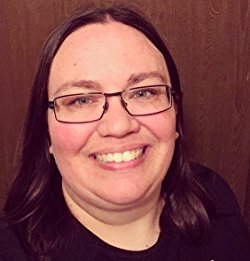 Tell us about yourself and how many books you have written.
I’ve written four novels and countless short stories. I’ve published one novella to date but have several more publications planned for 2018!

What is the name of your latest book and what inspired it?
Vasilisa the Terrible: A Baba Yaga Story was inspired by the original fairy tale, Vasilisa the Beautiful, along with the greater Baba Yaga myth. Baba Yaga is often seen as an ambivalent character, as opposed to strictly evil, so I wondered what the story would look like if she was simply a misunderstood spinster. I also wanted to examine the relationship between each character’s physical appearance and how this would impact the way people view them.

What authors, or books have influenced you?
My earliest influences were John Bellairs and Edward Gorey. Other notable influences include Clive Barker and, more recently, Josh Malerman.

What are you working on now?
I’m juggling several projects right now, including the next book in the Midnight Myths and Fairy Tales series and an untitled horror novel. I’m also excited to be working on something completely new – Missing in Michigan: Alexa Bentley Paranormal Mysteries Book One.

Do you have any advice for new authors?
Write something you love because you’re going to spend an exorbitant amount of time living in that world. Promoting it once it’s done will take even more time and energy than writing it, so be prepared for that reality.

What are you reading now?
The Faithful by S.M. Freedman.

What’s next for you as a writer?
I have several projects that will be released in 2018, including The Haunting of Cabin Green, which is a very dark, modern Gothic, psychological horror novel.

If you were going to be stranded on a desert island and allowed to take 3 or 4 books with you what books would you bring?
I’d rather take my Kindle loaded with books and a solar charger. But if that’s not an option, I’d choose Fahrenheit 451 by Ray Bradbury, Bird Box by Josh Malerman, Saga Deluxe Edition Volume 1 by Brian K. Vaughn, and Imajica by Clive Barker.