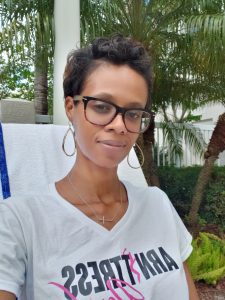 Tell us about yourself and how many books you have written.
I was either in the second or third grade when I discovered poetry, and in the forth grade when I discovered romance novels. With poetry, I thought it was cool how you could express yourself, create a scene, and even tell a story. Now as for the romance novels, welllll…. We moved into this house and the lady that lived there was an avid romance novel reader. In the garage, there was a little room. In that room, there were a bunch of books, magazines, and some other things. Being the curious kid that I was, I looked through everything. Out of all that was in that room, one book stood out. The cover was simple. The background color started off cream at the top and faded to white as it got to the bottom. At the top was the author’s name, the title below that. Both were in a whimsical type font in bold black letters. Under the title was a small set of eyes and a woman standing on what looked like a podium, naked with her back facing the reader. The name of the book was Once Is Not A Enough by Jacqueline Susann who also wrote Valley Of The Dolls. I remember opening the book and the first thing I read, was a scene where two women were having sex with each other. I had no business reading that book. I took it to my room and finished it in two days.

That’s when my writing journey began. In the beginning, I wasn’t consistent. I was just writing poems just to tell family members, well just my mom that I loved her. Once I got into high school, everything changed. My writing was influenced by the sex I wasn’t having. Life after high school had me writing about my emotions and the sex that I was having and wanted to have. I eventually started sharing more and doing open mics. My emotional inspired poems were sparking conversation. I thought that was amazing. I was getting requests to write poems for other people and for weddings. People trusted my words enough to have me write a piece for their loved ones.

The next part of the journey was attempting to get my poems published. I discovered that my poems/poetry would be hard to sell and market. It didn’t stop me though, it made me push myself as a writer. It pushed me so hard that my first novel, Dreamtini which was published in 2007.

When I wrote Dreamtini, I wrote the follow-up immediately after. I was hoping to release that a year later. I had to take an hiatus which lasted nine years. During that time I became a mother twice, to two handsome boys. In 2016, I made the decision to start following my passion and at the same time show my boys that anything that they are passionate about or any dreams that they had, they could make happen. It’s been a long journey but I’m here and to date I’ve written, two novels, Dreamtini and Dreamtini II: The Reality and two poetry books, Pieces of Me and Simply Me.

What is the name of your latest book and what inspired it?
My latest book is titled, Dreamtini II: The Reality. It is the follow-up to my first novel, Dreamtini.

What authors, or books have influenced you?
I can’t say that any author in particular has influenced me. Writing is just something that I just enjoy doing.

What are you working on now?
I’ve just released Dreamtini II: The Reality, so I’m getting ready to promote that as well as launching a podcast. Soon after that I will begin to work on m next book, The Tales of Kayla & Kay-Kay.

What is your best method or website when it comes to promoting your books?
The best method for me as far as promoting my books would be a tie between my newsletter and word of mouth.

Do you have any advice for new authors?
My advice to new authors, keep writing, your story needs to be told and read.

What are you reading now?
I am currently reading, Mastery by Robert Greene.

What’s next for you as a writer?
Launching my podcast and releasing my next book.

If you were going to be stranded on a desert island and allowed to take 3 or 4 books with you what books would you bring?
The Alchemist, Catcher In The Rye, Anything by Robert Greene.