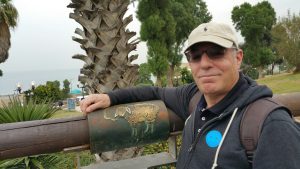 Tell us about yourself and how many books you have written.
I'm relatively new to writing and maybe a bit older than the usual newbie. I have written 4 books so far and am working on a 5th.
I am a native New Yorker, having grown-up in Brooklyn, but I categorize myself as a 'well-travelled’ engineer, having worked in over 50 countries so far. I’ve also lived overseas in Hong Kong and China for several years during my career, as well as in several states and spent extended periods elsewhere. There are still a lot of places I have not been and would love to see and experience, but it's that exposure to the people I've met and the experiences that influence and inspire my writing. It's this combined exposure that has given me some (hopefully) different perspectives on life, people and cultures that I try to utilize in all my writings.
I'm also a consummate car buff, having owned and rebuilt many over my lifetime and still have (3) old convertibles of varied years, marques and countries of origin. Those, too, can find their way into my stories. As does music. I love and listen to music of all kinds and like to learn more about the song's origins, as well as developing my own associations and inspirations from them.
My favorite reading and writing genres are Science Fiction and Mysteries/Spy novels. Of the books that I've already written, all but one are Sci-fi, but mix espionage into their stories. The last, the one that was recently published, is a family saga that covers a lot of ground – more than just the 60-year story of members a fictitious generational family based in a small town in the Florida Panhandle.

What is the name of your latest book and what inspired it?
My book's title is 'Morris'.
My main inspiration and influence for this book is family. Not that any of the stories or characters are based on anyone of my family, but my relationship with my wife, children and grandchildren, as well as the closeness of aunts, uncles, siblings and cousins and the support they afford each other. The interactions between us all of different generations and family branches became the basis of my life and ultimately, influenced my writing.
On the title, Morris is actually a character in the book. While I initially did try to build some mystery around who Morris is, it is revealed early-on that he's actually the main characters’ car. There's no anthropomorphism, so Morris never speaks, but he's not just an inanimate object. The point is that he's a legacy, passed between each successive generation and is part of and present at most key points in each of their very different lives and stories. He is the continuity between them all. He's also becomes the one they write to as the substitute for 'dear diary', which is really where the title comes from. The idea of Morris as a character was born out of my continuous ownership of an old British sportscar for over 30 years and counting.
The story itself gets its inspiration from many sources, but mainly from the headlines, both current and historical. From growing-up in the 60's, 70's, 80's, etc. From working in the fashion industry with the interesting and diverse peoples I've met and places I've been. From the music I've listened to and the artist’s stories behind the origins of their songs.
As such, my book touches on many key points and subjects in history, as family members go off to war or are caught-up in the politics of their day with regard to prejudice about race, gender, interracial or same-sex romance and marriages; the changing views on alcoholism and depression, all showing how their attitudes and those of others around them evolve over time. And for each to show their resolve and ability to rise above it all to try to find love, success and happiness, as opposed to merely surviving.
The book is long at near 640 pages and covers over 4 generations. It starts in the early 1960's with a school assignment to a then teenaged Jessie Peterson as he continues to chronical his life, even after passing the task on to his daughter, Beth, which she in turn passes to her children Matt and Billie. Each successive generation changes the direction of the story somewhat, adding new situations and adventures with different perspectives that I hope keep it all moving and interesting.

Do you have any unusual writing habits?
Well, much of my writing is done at 30,000 feet. That unusual enough? 20 hours each way on planes to Asia, 5-6 times a year gives you a lot of time alone to write and create. The pandemic has me grounded and less time to do this, but I’m finding it.
I also like reading stories that ‘work’, so I make a point to develop the back stories, side stories, look-up details, find inspiration pieces and photos for all my characters and locations as I write a book, even if they are never used. It takes more time, but makes me feel better that what I write can make sense. At least to me, of course. Maybe not everything does, but being new to this, I'm still learning.

What authors, or books have influenced you?
By far, all the science fiction greats like Jules Verne, H.G Wells, Edgar Rice Burroughs, Isaac Asimov, Ray Bradbury, Arthur C. Clarke, Robert Heinlein, Larry Niven and Frank Herbert. My mother was an avid mystery reader and our home was full those books, so I'd also have to list Agatha Christie, Earle Stanley Gardner, Scott Turow, Ian Fleming and Robert Ludlum as well.

What are you working on now?
I'm in the middle of a Sci-Fi trilogy that could become 4 books.

What is your best method or website when it comes to promoting your books?
Well, I'm now on Awesome Gang and Goodreads. I'm only learning them now. I just got a list from another author that I have to investigate.

Do you have any advice for new authors?
Write. You have an interesting subject in your head, put it on paper (or on a screen, as I date myself) and play with it.
Put it to the side – walk away and do something else before coming back to it again.
Lose it and rewrite it from memory. Yeah, I really did that, but it actually helped. When I did find the original, I liked what I did later better.

What is the best advice you have ever heard?
‘Immerse yourself’. It was the mantra of a professor teaching language, but I’ve adopted it for just being part of the way to enjoy the world. And writing.
There’s a big difference between tourism and immersion, for example. One is being a spectator and the other is being involved with the experience.
Same for writing. And reading. Worked for me on a lot of levels (but I’m still terrible at languages).

What are you reading now?
I’ve gotten into other independent authors and their recent releases, Like E.K, Frances and Scott Kimak, but many others as well.

What’s next for you as a writer?
I've got a lot to learn still about both writing and marketing.

Once I finish this Sci-Fi series, I’m thinking of going back to my roots in heavy industry to start writing a novel about a spree of strange crimes and goings-on around a closed 100+year-old refinery. My experiences working for 10 years in a million-square-foot factory built in the mid 1800's, with all it's hidden tunnels and caverns might inspire a good mystery (or horror) story.

If you were going to be stranded on a desert island and allowed to take 3 or 4 books with you what books would you bring?
That's hard. I like too many, but it would have to be Verne or Wells. Any of their books.

To discover a new author, check out our Featured Authors page. We have some of the best authors around. They are just waiting for you to discover them. If you enjoyed this writer’s interview feel free to share it using the buttons below. Sharing is caring!

If you are an author and want to be interviewed just fill out out Author Interview page. After submitting we will send it out in our newsletters and social media channels that are filled with readers looking to discover new books to read.

If you are looking for a new book to read check out our Featured Books Page.