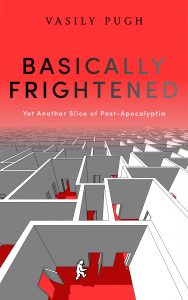 The world is in turmoil. Having conquered one pandemic, no-one is quite prepared for The Shakes, a virus that decimates the planet. One unassuming man takes his first tentative steps outside and, armed with a knowledge of nothing in particular, he is ready to meet new allies, new villains, love, hate, and everything in between. The first in the ‘Basically Frightened’ series is a witty and dry British take on the post-apocalypse, a place where a knowledge of obscure films and how to fly a helicopter might just be enough to get you through the day. Prepare for a refreshingly different mix of satire, thrills and bewilderment with ‘Basically Frightened’, the book that started it all.

Author Bio:
Vasily Pugh is the kind of bloated fool who refers to himself in the third person. Writer, film critic and Amazon contributor, Pugh (me) has contributed numerous very different works of fiction to the world. Author of post-apocalyptic series ‘Basically Frightened’ and it’s sequel ‘Outside Looking Out’, darkly witty thriller ‘Gusto’, the uniquely absurdist ‘Mauve Alert’ and popular amateur sleuth book ‘The Insomniacs’ Club’, Pugh cannot help but invest everything with t hat delightful (or annoying) dry wit – think PG Wodehouse but much less intelligent. His works have been acclaimed as ‘unique’, ‘zany’ and ‘quite unlike anything else’, and Vasily Pugh has even bored the world with an irreverent take on his own battles with Fibromyalgia (detailed in his book ‘So You’ve Got Fibromyalgia’). Yes, the writings of Vasily Pugh will have something for everyone.