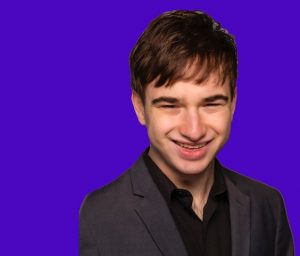 Tell us about yourself and how many books you have written.
I have written somewhere around 150 different stories and books. Many of these “books” are actually just skeletons of stories rather than fully fledged, and I just like calling them books because it makes it sound more impressive. However, a lot of them have potential to become fully fledged books and I am pretty proud of myself for being able to come up with so many different story lines.

The other thing about myself I want to share is that I happen to be autistic, something which has actually helped me become a writer. I struggled to communicate when I was younger, but I found my voice through storytelling, which led eventually to writing. Recently, I was asked about my success as a writer in spite of being on the spectrum, and I want to point out a couple of things which are wrong with that question. First, the question implies that autism is a barrier to success which strengthens a lot of harmful stereotypes about how we cannot lead full and successful lives. Secondly, my success as a writer is not in spite of my autism. If anything, it is because of my autism.

What is the name of your latest book and what inspired it?
My latest book, In the Hole, which is my first Young Adult novel, was inspired by a class at religious school where my rabbi showed my class a video about homeless children in Florida. Seeing their struggles opened up something in me and I wondered if maybe I could help with my writing. I then pictured my main character, David Kimball, and his story slowly began to come to me. I am delighted by how much potential I’ve been told In the Hole has to raise awareness about the homelessness crisis, and I really hope reading about what David went through can inspire other young people to overcome their own problems.

Do you have any unusual writing habits?
I have some habits I tend to engage in when I write, most of which I unfortunately find problematic. For example, I love warming up by playing a game for making up characters, but I think I am addicted to this game, because I usually end up making too many characters. However, there are other habits that are fine, such as playing music while I write, which I love to do. What is important for me is to make sure is that these habits aren’t limits that I end up feeling like I need to do before I write, or things that keep me from writing. I like being able to write regardless of the time of day and what I have access to, which is a goal I am working towards.

What authors, or books have influenced you?
There are a lot of books which have influenced me. In fact, I like keeping a shelf of the books which have inspired specific stories of mine, which I love having in my room. I call it my “Inspiration Shelf.” This shelf includes a Disney collection, A Christmas Carol by Charles Dickens, several Magic Treehouse books, and many biographies. I also have a Hardy Boys book, and all of the books by one of my favorite authors, Sue Bentley. Also, the legendary Derek Jeter has written a series about the lessons he’s used to achieve his dreams, and it inspired a series I’m currently working on about a reading and writing club. It is important to remember that you can’t force the inspiration; inspiration usually comes to you. When you read, don’t look to be inspired, but also remember, this book could change your life!

What are you working on now?
I am currently working on five different projects: four stories as well as a book I wrote by hand, which I am now typing up. This final work is sort of a sequel to In the Hole, which depicts the story of David’s friend, Gloria who, like David, is homeless. This book, Thrive, focuses on the problems of both homelessness and racism. In addition, I am writing a biography about the Wright Brothers, a musical about a girl who is whisked to a magical world which I am still developing, and the seventh book in the series about a boy whose life revolves mostly around the friends from his reading and writing club. Also, I manage my school soccer team as a way to get better at writing sports series, and I write a book for the team every season. It is a lot of fun to do research so you can be better at writing about the things you love to write about!

What is your best method or website when it comes to promoting your books?
To be honest, I still have a lot to learn in that department. Mostly, what I do is post about my books on Instagram or Facebook, or do interviews such as this one. With every book, I learn more about selling my stuff, and I just need to work on keeping the stream of buyers going over time.

Do you have any advice for new authors?
I say this every time I am asked to give other writers advice: Read a lot of books, watch a lot of movies and television, and live a lot of life. Books, television, and life inspired and informed my stories. And it is also important to ask yourself: what are you passionate about? What do you regularly write about? Finding some common patterns can help you come up with new ideas for your stories. Similarly, what you like to read can also influence what you like to write. For example, I love reading about sports, friendship, and history…and I love writing about them too!

What is the best advice you have ever heard?
When my first self-published book, Ghost Wars, was released, I was a little frustrated by how slowly the sales went, and that I didn’t have a lot of books sold on Amazon. Once, I ended up venting about this is in Study Skills class and a friend told me, “Everything struggles at first and the important thing is to keep moving forward.” Hearing this from him helped me learn not to give up so easily, and also helped me become more patient with how things usually start off slowly. Even though I’ve had to be patient, both with book sales and with my growth as a writer, I can now see that it was necessary to have that time to grow. Now, with In the Hole launched and a lot more books being sold, I recognize the value of how I stuck with it over those years.

What are you reading now?
Currently, I am very engrossed in two different books I have to read for school: Born A Crime, by Trevor Noah, and The Song of Achilles, by Madeline Miller. Both of the books are heartwarming in their own way. I love The Song of Achilles because reading about Achilles and Patroclus’s relationship was so sweet, and they are so cute together! I also love Patroclus’s humility and thoughtfulness. Plus, I am grateful Miller made Patroclus the awkward small type because I am kind of similar physically and books don’t tend to make heroes like that, so I appreciate it.

I also enjoyed reading Born A Crime. It was humbling and saddening at the same time to read the pages, as Trevor Noah poured his heart, trauma, and soul into his book. I couldn’t imagine going through some of the things he’s been through such as having an abusive stepdad, not getting to see my dad too often in fear I’d give away the fact my parents had done something illegal, struggling with police brutality and prison, etc. And at the same time, I could relate to some other factors, such as Noah’s troubles with girls. Having relatable characters always makes books easier to read.

What’s next for you as a writer?
I have a lot going on with my writing. My publisher is releasing the first five books in my Nellie’s Friends children’s books series this December, and I am hoping to publish Thrive in a year or so as well. I also want to keep coming up with new story ideas and potential publishing material. Additionally, I have a lot going on with promotion this fall. I am running a book club and also organizing a sleepout at my high school to raise money for homeless and trafficked youth in New Jersey. I feel hopeful about whatever is ahead.

If you were going to be stranded on a desert island and allowed to take 3 or 4 books with you what books would you bring?
Wow, this is another good question. I don’t know if I could only pick three or four! I did go to sleepaway camp once when I was 15, and I ended up taking four books with me then…and they were all biographies. I probably would take all biographies again…and at least one of them would have to be about an athlete because I love reading about sports.

I’d probably bring Derek Jeter’s The Life You Imagine, My Family Divided by Diane Guerrero, The Game of My Life, by Jason McElwein, and The Lions of Little Rock by Kristin Levine. It actually might be good for me to have only a few, because I tend to read a lot of books at once, and I usually end up skimming them, whereas when I have only a few books, I actually ending up reading them more carefully. Something for me to think about!