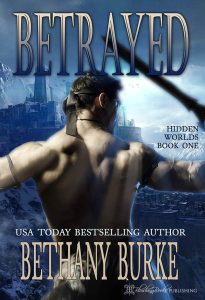 Four hundred years in the future, life on Earth is perfect. The genders are equal. War is non-existent. Everything is clean, safe, and wonderful, due to one cause: In the early years of the twenty-second century, over 90% of the Earth’s population was relocated by force to colony planets spread over the galaxy.

Jen Marin has a gift for languages. When she’s slotted at the last minute into an off-Earth expedition to study the linguistics of a colony planet, she never questions the assignment. It’s a perfect opportunity to get an advantage over her fellow academics on Earth. She, along with her companion Christy, also never questions a recreational trip to an isolated area of the planet’s surface, that is until they go back to the space craft – and it’s gone.

As impossible as it seems, they’ve been abandoned. But why? And to what? Jen’s new reality is a world where her body is not her own, filled with heavy handed warriors, cruel Matrons whose sole purpose is “training” young women for their marriages, a prince who wants Jen for his own, and mysteries that seemingly have no answer.

It has to be a mistake, right? The ship is coming back for them, right? Or have they been betrayed in ways they can barely begin to imagine?

Author Bio:
Bethany has been writing professionally since the mid 1980s. In the early 1990s, bothered by the what she perceived as an increasing trend towards "politically correct romance," Bethany began self-publishing her spicy romances and sending her Xeroxed books out through snail mail. With the dawn of the Internet in the late '90s, Bethany was freed (at last!) from all those tiresome late night trips to the 24-hour Kinkos and from standing in line at the post office. She launched her first website on a September day in 1998, went out for dinner, and came home to find that sixteen people had bought one of her books. She never knew how they found her, but she's never looked back.