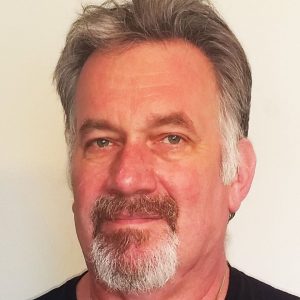 Tell us about yourself and how many books you have written.
I’m a sci-fi writer living in Chicago and I’ve had five novels published and two more in the queue. In brief, I’m award winning, critically acclaimed, author of novels, graphic novels, comic book series, and have appeared in numerous anthologies. I began writing professionally in 1986 for the Chicago Rocker Magazine in conjunction with my radio show on Z-95 (ABC-FM) and went on to write for several other magazines and blogs. I currently write a twisted news & science blog at WorldNewsCenter.org. It provides source material for my weekly radio show on WBIG 1280 AM, FOX!.

I’m a big fan of vodka, music, and this purple haired goddess who keeps waking up in his bed.

What is the name of your latest book and what inspired it?
SPLICE: HIT BIT TECHNOLY. I kind of came at this one sideways. Tye Feimster, CEO of ©Watchdog Entertainment® LLC. asked me to review some comics his company had released. During the course of my reviews I kept circling back to one character who appeared in every issue, but was used as a Mcguffin. I wanted to know about him. The next thing I knew I’d been hired to tell his story.

Do you have any unusual writing habits?
Not really. I like listening to loud, upbeat, music of any genre. Yes, even dub step.

What authors, or books have influenced you?
There have been tons but the two that stand out are A Canticle for Leibowitz by Walter M. Miller and The Voyage of the Space Beagle by A. E. van Voght. The former for its deep dive into how a religion forms and then how it influences society over the centuries. It is an amazing example of world building. The latter for its batshit crazy look at alien encounters. The book transcends paranoid in chapter one and doubles down in each ensuing chapter. Whenever I ask how far I can go, Space Beagle reminds I can always go further.

What are you working on now?
Right now Book 3 of the Goptri of the Mists series. This series is the prequel/sequel to The Brittle Riders, which I once, innocently, assumed might be worth a novella. Instead it tossed out at 300,000+ words which inspired readers to ask what happened to the rest of the world. So I’m answering that.

What is your best method or website when it comes to promoting your books?
I use my website and newsletter for promotions. My publisher handles the rest. This helps keep me sane.

Do you have any advice for new authors?
Writing, like any craft, requires practice and study. As one author once told me, “You can’t break the rules until you know what they are.”

What is the best advice you have ever heard?
No matter what, there is always someone bigger, faster, stronger, and/or smarter than you. Pick your fights carefully.

What are you reading now?
Out of the House of Frache by Genevieve Kennedy. It’s the genealogy of my family. I know almost nothing about where I came from so this seemed a good way to learn.

What’s next for you as a writer?
Finish the Goptri series, and keep submitting shorts to anthologies.

If you were going to be stranded on a desert island and allowed to take 3 or 4 books with you what books would you bring?
A Canticle for Leibowitz by Walter M. Miller
The Dance of Time by David Drake and Eric Flint
Kindred by Octavia Butler