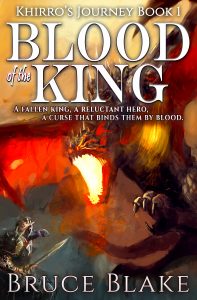 About Blood of the King

With a vial of the king’s blood in one hand, and a sword of legend in the other, one soldier sets out on an odyssey that will change his life… or end it.

Forced into the army, Khirro never wanted to fight. And with the monarch dead, any hope for the kingdom’s survival hangs by a slender thread. But when the king’s shaman charges Khirro with a curse, he’s compelled to undertake a journey to the haunted land in search of the outlaw necromancer. And if he fails… the very walls of the fortress itself will fall to the blood-crazed undead.

Can Khirro complete his quest in time to save his realm from a brutal end?

Author Bio:
Bruce Blake lives on Vancouver Island in British Columbia, Canada. When pressing issues like shovelling snow and building igloos don’t take up his spare time, Bruce can be found taking the dog sled to the nearest coffee shop to work on his short stories and novels.

Actually, Victoria, B.C. is only a couple hours north of Seattle, Wash., where more rain is seen than snow. Since snow isn’t really a pressing issue, Bruce spends more time trying to remember to leave the “u” out of words like “colour” and “neighbour” than he does shovelling (and watch out for those pesky double l’s). The father of two amazing children, Bruce was once the trophy husband of a burlesque diva…not so much anymore.

Bruce’s first short story, “Another Man’s Shoes” was published in the Winter 2008 edition of Cemetery Moon. Another short, “Yardwork,” was made into a podcast in Oct., 2011 by Pseudopod. Since then, he has concentrated on writing novels, publishing the Khirro’s Journey trilogy (Blood of the King, Spirit of the King, and Heart of the King), three books in the ongoing Icarus Fell urban fantasy series (On Unfaithful Wings, All Who Wander are Lost, and Secrets of the Hanged Man), and the six part Books of the Small Gods series (When Shadows Fall, The Darkness Comes, And Night Descends, When Ravens Call, The Twilight Fades, And Kingdoms End). His next book in his new Curse of the Unnamed epic fantasy series will be out in December.