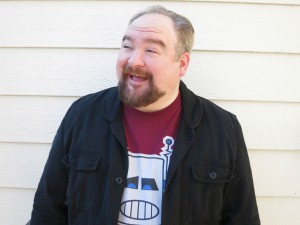 Tell us about yourself and how many books you have written.
I BROUGHT HOME A CHUPACABRA is my first Kindle book. Years ago I published a collection of plays simply called TWO PLAYS (AND SOME SKETCHES) BY BRAD McENTIRE, but it is now out of print. I also did a short ebook on thearical solo performance a while back called 7 CONSIDERATIONS FOR THE SOLO PERFORMER. I have a paperback collection of comics available called I HATE HAWK SEASON as well. It can be found on Amazon. It is a collection of comics that originally appeared on the webcomic site Dribble Funk Comics. The series is named after the main charcater Donnie Rocket Toaster-Face.

What is the name of your latest book and what inspired it?
I BROUGHT HOME A CHUPACABRA was inspired by my wife. She is a supreme dog person. I mean, she wanders straight up to dogs when she first meets them and gets all up in their faces. I am always worried that she will someday get bitten in the face.

She’s also the kind of person who when she hears about, say, traffic accidents that involve people and their pets, she cries because animals were hurt (nevermind those pesky humans who also might have suffered…)

I thought, what if she was this obsessive about something that was not a dog. What if it was a mythical beast of some kind? Thus was the seed of I BROUGHT HOME A CHUPACABRA born.

Do you have any unusual writing habits?
The unsual thing is, I don’t have really any staedy habits. I get an idea, then let it percolate in my brain for a while. Then I lay it down on paper in a mad dash. Then rewrite as needed.

I wish I coul be one of those people who sits down every day and turns out so many hundreds of words like clockwork.

What authors, or books have influenced you?
In the theatre, I am influenced by the works of Samuel Beckett, Mickle Maher and David Mogolov.

In a wider scope, I like Hemingway a lot. And William Gibson. And Elizabeth Gilbert.

Walt Disney has had a big effect on me, too.

What are you working on now?
My latest play is called THE YETI IN THE AIRPORT LOUNGE and will go up in Dallas in December 2015.

What is your best method or website when it comes to promoting your books?
This one, maybe?

Actually, I have gotten a lot of traction with Facebook.

Do you have any advice for new authors?
Ignore that phrase “Write what you know.”

Ignore it because, seriously, what’s the alternative? Writing what you don’t know?

What is the best advice you have ever heard?
Fight to stay excited

What are you reading now?
I am actually reading non-fiction at the moment. I am almost done with T. Harv Eker’s SECRETS OF THE MILLIONAIRE MIND.

What’s next for you as a writer?
I am working on another one-person show about a man with one of the highest IQs in the world. He may have solved one of the biggest problems plaguing humanity, but because he has a heavy southern accent and no credentials he is overlooked by the academic system. The working title of that one is called BARTHOLOMEW CLADWELL COULD SAVE US ALL.

If you were going to be stranded on a desert island and allowed to take 3 or 4 books with you what books would you bring?
I’d bring a collection of Shakespeare, of course. I’d also probably take the collected short stories of Hemingway, MEDITATIONS by Marcus Aurelius, Peter Brooks’ THE EMPTY SPACE and a book called ZEN AND THE ART OF MAKING A LIVING by an author named Boldt. That last one is actually filled with way more than the title implies.