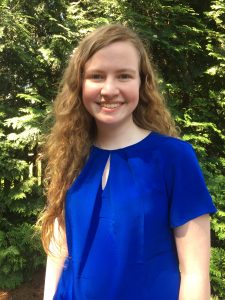 Tell us about yourself and how many books you have written.
Hello! My name is Cady Hammer, and I am the author of Chasing Fae, a young adult fantasy novel that is just about to be released (end of July 2020)! I have always been a writer. I wrote my first novel at the age of eleven between classes. Although that text will never see the light of day, I continued experimenting with stories throughout my school years. I was often teased for being off in my own world a bit, but I have never hesitated to invite others along on the adventure I was weaving. My college studies of history and anthropology play a major role in the worldbuilding in my stories, particularly this debut novel. It is always my goal to create a world that readers want to step into, a world where they can breathe in the air and feel the wind on their skin as they stroll through a market or a city center. I also run the internationally-read website, Fluff About Fantasy, a place for young writers to learn the genre-specific craft of writing fantasy and be inspired by what they can accomplish. It is important to me to get more young people writing and creating. I know that there are a lot of talented middle school, high school, and college students who just need a little push to get them started.

What is the name of your latest book and what inspired it?
My debut novel is called Chasing Fae. It follows the story of a young mortal woman, Grace Richardson, who travels into the Fae’s world to avenge her older brother’s mysterious death. I came up with the idea for this story during one of the lowest points of my life. A friend who I had considered like a brother to me abandoned me without so much as a word. It was at a time where I was dealing with a lot of stress and grief due to bullying at school and complications in my parents’ divorce. I was heartbroken. After a while, I didn’t want to be angry or upset anymore, so I took that pain and pushed myself to create something beautiful from it.

Do you have any unusual writing habits?
Hmm… unusual habits? I guess something interesting is that I prefer to work from a laptop in my lap rather than at a desk. I like sitting in the living room or the dorm lounge with more open space around me. It doesn’t usually bother me if there are other people in the room; I just like something about having more space than being confined to a desk in my room or at the library. I love to listen to music while I write as well, either out loud or with earbuds in.

What authors, or books have influenced you?
Sarah J. Maas is my absolute favorite author of all time, and both her Throne of Glass series and A Court of Thorns and Roses series inspired me to tackle my own fantasy book. I listened to a book talk of hers when A Court of Thorns and Roses first came out, and it was amazing. She listens to music when she writes to inspire different sections or scenes just like I do, and hearing her process and her laughter when she spoke made me feel like I could be an author someday just like her. I am a huge Rick Riordan fan; his Percy Jackson and Heroes of Olympus series were a big part of my childhood. The Harry Potter series and the Mortal Instruments series are also two of my favorites; the former was my introduction to fantasy, and the latter was my favorite series for the longest time. Cassandra Clare writes some of the best characters I have ever had the pleasure of reading. I could just go on and on.

What are you working on now?
I have just started the first draft to the sequel to Chasing Fae, Chasing War. I hope to make more progress on it after the first few days of my launch pass.

What is your best method or website when it comes to promoting your books?
I have found Twitter to be the best social media so far for promoting my books. I have been on Twitter for about a year and a half now, and I am just blown away by the #WritingCommunity that is present. The writers invited me into their circle practically right away and really spent time to getting to know me and to encourage me as a young writer. Quite a few of my followers preordered my book during my presale campaign, and many others have let me know they intend to purchase once the book comes out. I met some of my best writing companions on Twitter, and I think all writers should take the time to cultivate a presence on the site.

Do you have any advice for new authors?
Just start. The hardest part of writing your first draft is starting. A blank page is intimidating. Doubts often begin creeping back into your head. Is this the right idea? Do I know enough about what I want to write to start writing? Am I a good enough writer to start a novel on a whim? What am I doing? I promise you, you are good enough. The most important thing is to just start. Once you start, there’s no telling how far you can go.

What is the best advice you have ever heard?
The best writing advice that I have ever heard came from Neil Gaiman in the preview for his MasterClass on writing. It is one of the few pieces of advice that has really stuck with me throughout my publishing journey. Gaiman says that the second draft of a book is where the writer makes the first draft look like they knew what they were doing all along. That was such a powerful message for me because in the past, I tended to try to edit myself as I was drafting. Once I understood this quote, I was able to recognize that I needed to just write straight through and try not to go back even if there were things I wanted to fix. Everything could be addressed in revisions. The first draft was about getting the words and ideas out of my head and onto the page.

What are you reading now?
I am about to start reading Circe by Madeline Miller. One of my friends recommended it to me, and I am finally going to get around to reading it in the coming month.

What’s next for you as a writer?
I plan on working on two books during the academic year: the sequel to Chasing Fae and a nonfiction book about teaching history in new, fun, and interactive ways for all ages.

If you were going to be stranded on a desert island and allowed to take 3 or 4 books with you what books would you bring?
* A Court of Mist and Fury by Sarah J. Maas
* Little Women by Louisa May Alcott
* Heir of Fire by Sarah J. Maas
* The Lost Hero by Rick Riordan