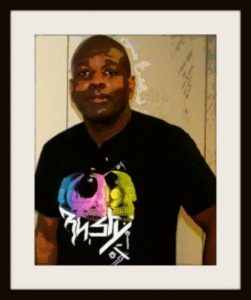 Tell us about yourself and how many books you have written.
Hello. I have been writing since the mid-80s. I had plays produced locally in Houston in the late 80s. I started out writing poetry. I guess for many writers, that voice leads one to express themselves poetically before they tackle the task of writing books. From poetry, a writer usually tries short stories. So far I’ve written several hundred poems, three dozen stories, two novellas, and three book-length novels.

What is the name of your latest book and what inspired it?
My latest book, which I’m in the middle of editing, is tentatively titled The Holey Swets Underwear Manufacturing Company. It was kind of inspired by my desire to produce a line of men’s underwear, which I never pursued. The idea stayed in my head, so I decided to write a book about what happens when a manufacturer of men and ladies undies, move from New York to a small town in Texas. It’s a dark comedy so far.

Do you have any unusual writing habits?
No. I’m coming back from a long period of distraction. I hope to very soon be the guy who rises at midnight or is so moved to write, I have to stop then and there and write.

What authors, or books have influenced you?
My first writing teacher influenced me tremendously. I took a creative writing course under Rosellen Brown, and she was very very encouraging. I’m influenced by many African-American authors such as Baldwin, Hughes, Zora Neale Hurston. I also love the prose of E. Annie Proulx. She captures settings whether, they be mountains or dessert, or a New England town like no other. I love the poetry of Ginsberg and a little known poet named Ai,

What are you working on now?
The Holey Sweets Underwear Manufacturing Company

What is your best method or website when it comes to promoting your books?
Believe it or not, I’m just discovering ways to promote outside of random postings on Twitter or Facebook. I feel like I’ve been under a rock. I’ve got lots of work, long and short on the major retailers, but simply have been lax in promoting. I thought it was too costly, or simply wasn’t for me because I don’t write in specific genres. However, websites and book promo services are great tools. Bargain Booksy seems to be a great promo site. I can’t wait to see how I do with the sites on Awesome Book Promo.

Do you have any advice for new authors?
Never give up. Never throw away or burn anything. It’s your work. Ten years later you might look at something with fresh eyes and go, “I can make this work.” If you’re growing and studying your craft you will have fresh eyes. Stay current on trends in tech and promotion. I didn’t get on the kindle bandwagon until almost two years after it was introduced. I got in on the tail end of a publisher who was actually giving a platform to self-published authors. A month after I got all of my books on the site, they discontinued. Please write your own stories. Don’t be influenced by trends or try to shape your work to fit a current trend. And just write, write write.

What is the best advice you have ever heard?
Don’t be afraid to kill off your darlings. In other words, don’t try to make a character, scene or one of your great paragraphs, or witty dialog fit just because you love it. Save it for another book or story.

What are you reading now?
Not a lot. I’m just being honest. But I am picking up a poem, or short story here and there. It’s a bad habit not to read.

What’s next for you as a writer?
Get back into writing, hot and heavy. I want to write a memoir about growing up between the ages of nine and twelve in a neighborhood that was transitioning from white to black. Plus I want to touch on my sexuality and my relationship with my mother.

If you were going to be stranded on a desert island and allowed to take 3 or 4 books with you what books would you bring?
Confederacy of Dunces, something by E. Anne Proulx, The Bluest Eye, and Giovanni’s Room