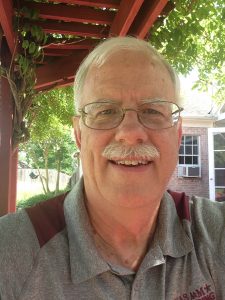 Tell us about yourself and how many books you have written.
I am a retired Air Force officer, aerospace industry professional and university engineering researcher. My interests include history, reading, playing guitar, thinking about things and simple woodworking projects. Now that I have retired, I am devoting some effort to creative projects including the Cloudland children’s book series, a teenage Christian musical, a T shirt project called Safe Streets, and random observational thoughts.
I have written three books in the Cloudland series so far and have ideas for a fourth. This is my first serious attempt at authorship, unless I add a humorous book from years ago called A Buzzword Dictionary? which cataloged many of the “buzzwords” I heard in my Air Force career… or technical documents from my years in aerospace research.

What is the name of your latest book and what inspired it?
The Cloudland books were inspired by, believe it or not, a poem I wrote back in high school about twin snowflakes. The idea was that snowflakes can’t look alike and this defied “King Nature’s” laws. When I envisioned the snowflakes up in the sky, I began to build a whole separate world (Cloudland) for which I described the creation of snow, lightning, rain, etc. And I created adventures for humans interacting with the strange creatures and sites of that world.

Do you have any unusual writing habits?
None I consider unusual, but all painful, it seems. That is, although I can come up with ideas, getting those ideas on paper in well-written prose appropriate for the genre takes a lot of time and much re-writing.

What authors, or books have influenced you?
I’m big into history, to include military history. I was a huge fan as a teenager of the John Carter series, and to a lesser extent the Tarzan series, by Edgar Rice Burroughs. Another passion is anything Sherlock Holmes. Favorite authors include C.S. Lewis, Michael Chrichton, Tolkien, J.K. Rowling and John Grisham.

What are you working on now?
I’ve got ideas for a fourth Cloudland book but I have two other projects taking my time. I have written a teenage Christian musical that will be performed locally here sometime this year, I look forward to getting that off the ground. And I have trademarked a design for T shirts that pedestrians can use to remind drivers to slow down in their neighborhoods. The creation side of project is fun, the marketing side, not so much.

What is your best method or website when it comes to promoting your books?
I have really just begun on the promotion side. They are on my website (listed later), are available through a number of eBook sites, and I have started reaching out to various groups or sites for reviews.

Do you have any advice for new authors?
The most practical advice would probably be to know what style of writing is most appealing to your audience, and work at the craft of focusing and improving your writing style. In my case, I had a lot to learn about the style of book appropriate for children aged, say, 7-11. But I worked with (and sometimes fought with) a good editor, and writing, like any endeavor, can be improved with practice.

What is the best advice you have ever heard?
Well, I don’t know how it influences my writing, but there’s some pretty good advice in the Bible.

What are you reading now?
Next in the queue is Dead Wake by Erik Larson and a little escapism with an Elmer Kelton western.

What’s next for you as a writer?
Hopefully a fourth Cloudland book. The tease is I’m thinking about calling it Skyland… I’ll leave it to you to guess the significance of that.

If you were going to be stranded on a desert island and allowed to take 3 or 4 books with you what books would you bring?
Whoa, my answer would undoubtedly change if I had some time to think about it. Probably Lord of the Rings, Harry Potter and Mere Christianity by C.S. Lewis. OK, that’s more than 3 or 4 books.