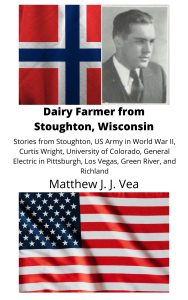 Author Bio:
Matthew J. J. Vea is the son of Matthew Johnson Vea and Ethelyne Elvira Hendrickson Vea. He was born in1951 in Boulder, Colorado where his parents we attending Colorado State University. He grew up in their homes in Boulder, CO, Pittsburgh, PA, Las Vegas, NV, and Richland, WA. He is married to Nadine Louise Russell Vea and they have 9 children. He has a BSEE from the University of Washington in Seattle, WA. He has worked in the Electronics and Aerospace Industries since 1975 and is currently a Principal Engineer Hardware R&D working for Adva Optical Networking.