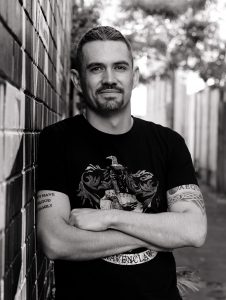 Tell us about yourself and how many books you have written.
I was born in Sydney, Australia, where I worked a disparaging collection of jobs after finishing high school, including being a combat medic for the Australian Army for over five years. In 2015, at the age of 29, I was sentenced to two-years imprisonment for firebombing a home, with the sentencing magistrate stating that my motivation appeared to be ‘vigilante action’. Someone in my family was sexually assaulted, and I aimed to get retribution against her attacker. I have written one book, which I completed by hand while I was in prison.

What is the name of your latest book and what inspired it?
My debut novel, Scarred, was inspired by my crimes and subsequent prison sentence. I took my story and exaggerated it, turning the main character into a caricature of myself. In a nutshell I knew first hand how much I needed to be pushed to commit a crime, so I experimented with my main character, seeing how far I could push him before he turned into a serial killer. From there I just rolled with the idea to see where his poor life choices would take him.

Do you have any unusual writing habits?
Aside from writing by hand in prison? Haha not really, I just like to be consistent. Now that I’m on the outside and have access to a computer I try to aim for typing a couple thousand words a night. I’m also a post-graduate student though so sometimes all of my energy for writing goes straight into essays!

What authors, or books have influenced you?
The only book they had in the prison library on the subject or writing was Stephen King’s ‘On Writing’. I’ve looked at a couple others since getting out of prison, but as far as I’m concerned, that’s the only one you need to help you.

What are you working on now?
I’m currently writing an autobiography. People keep telling me that while my novel is interesting, the story behind how I wrote it is even more so. You can be the judge of that if you read both.

What is your best method or website when it comes to promoting your books?
I’m still in the early stages of promoting my first book, so you’ll have to get back to me about that after I’ve got a couple under my belt!

What is the best advice you have ever heard?
What you know makes you unique. Write about what you know.

What are you reading now?
Under the Dome by Stephen King.

What’s next for you as a writer?
I’ve been booked to give a couple talks at writer’s festivals this coming year, about the experiences of writing a novel in prison. Talking about my novel in front of an audience is going to be a new experience, which I am both excited and pretty nervous about. I also aim to have the first draft of my autobiography finished within the next couple months.

If you were going to be stranded on a desert island and allowed to take 3 or 4 books with you what books would you bring?
That’s a touch one for me, because I rarely read a book more than once. But I’d have to go with Starship Troopers by Robert Heinlein, The Chrysalids by John Wyndham and IT by Stephen King.