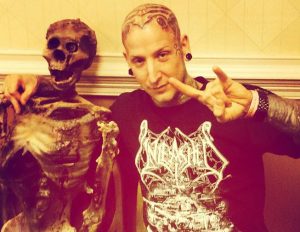 Tell us about yourself and how many books you have written.
I started out wanting to be a comic artist, even attending art school and shortly afterwords moving to New York. Interviews with DC and Marvel Comics made me realize how restrictive they were, and I came to the realization that I would have much more control if I wrote illustrated novels. Coincidentally, I’ve done illustrations for comics and magazines now that it’s no longer my priority, but that’s another story.
The End of the World is my third novel, published by Crossroad Press.
The Black Seas of Infinity was my first, in 2014 Splatterpunk released a signed and numbered chapbook featuring my story Christmas is Cancelled, and shortly afterword, Permuted Press both reissued my first novel, and published my second Down Highways in the Dark…By Demons Driven.

What is the name of your latest book and what inspired it?
My latest novel is entitled The End of the World. It’s a loose sequel to my first book The Black Seas of Infinity, kind of in the same way Road Warrior is a sequel to Mad Max (namely, you can enjoy the sequel without needing to read the first book).
Everything I write takes place in roughly the same universe, a concept I enjoyed in comics and books as a child, and this is a further expansion of the apocalyptic ideas I’ve been developing over the decades.

Do you have any unusual writing habits?
I often write at night, after the sun goes down, and whenever I stumble across a writer’s block and am unsure how to proceed, I put the work aside. Going for a run or bike ride recharges my batteries and never fails to help me think up the next plot development.
Even if I don’t immediately return to writing, I record notes of my new ideas in my phone.

What authors, or books have influenced you?
HP Lovecraft is my single biggest influence on style and mood, while John Steinbeck greatly sculpted my descriptive tendencies.
I read everyday, and we didn’t even have a TV in my household for much of my childhood. I’ve read thousands of books, so it’s hard to narrow down my influences. Almost any of the early work of Alan Moore, Dune by Frank Herbert, Snow Crash by Neil Stephenson, and Philip K. Dick were all early influences.

What are you working on now?
I just completed a short story entitled “Watching The World Burn”, and I’m debating on whether to delve into my new novel yet, or let loose on a few short stories first.

Do you have any advice for new authors?
Dive into the waters right away and test yourself!
Take advice from other authors, and fill yourself with mental notes by reading other author’s work. Don’t expect your first effort to be a masterpiece, but don’t make excuses and put less than 100% in it.

What is the best advice you have ever heard?
Have friends read it and give you feedback on what elements they like and how the story flows. If you know any authors, try and rope them into reading your book, ask for feedback, and actually listen to it when given.

What are you reading now?
Ringworld. It’s alright, but after reading The Ocean at the End of the Lane by Neil Gaiman right before, my standards have been set a little high.

What’s next for you as a writer?
I’m always thinking of where I want to go for a sequel. I feel dedicated to the world I’m constructing, and really hesitant to step aside from it into anything unrelated

If you were going to be stranded on a desert island and allowed to take 3 or 4 books with you what books would you bring?
That would be a difficult one.
I’d be tempted to bring all new work, but once those were read, if none were that great, I’d regret my choice!
So I’ll stick with 4 of my favorites.
I have a compilation of everything written by HP Lovecraft. That might be a cop out as far as choosing a single book, but I’ll take what I can get! I also have a similar volume encompassing the work of HG Wells, and another of the collected stories of Sherlock Holmes.
That aside, I’d need some art as well, so the best comic ever written, Watchmen, would be my likely choice.