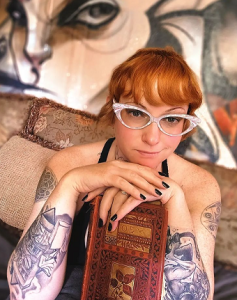 Tell us about yourself and how many books you have written.
Greetings and Salutations! I’m Dani, an illustrator and fiction writer living in Southern California. I write Urban, Epic, and Paranormal fantasy, with a dash of Horror thrown in. I have two series thus far, Black Dog and Rebel Rose (Adult) and Shale City: A Punk Fairytale (Young Adult/New Adult). All of my books are illustrated, which I think makes them stand out!

What is the name of your latest book and what inspired it?
Black Dog and Rebel Rose, a paranormal fantasy/horror title for adult readers. I originally published this one back in 2009, but resurrected it alongsinde my amazing co-writers, Amanda Schrader and Vincent van Hinte. Vincent is an actor/producer who has appeared in a number of films and television productions, including Star Trek: Into Darkness and The Walking Dead. He approached me about turning BDRR into a feature film, and in doing so we reworked the overall story and re-released it to the public. BDRR follows a half-angel huntree and half-demon hunter who run into each other while hunting vampires in an abandoned town. It’s great fun and a perfect Halloween or summer vacation read.

Do you have any unusual writing habits?
I always drink wine and some kind of adult beverage side-by-side while I write. Going “sideways” keeps the creative juices flowing!

What authors, or books have influenced you?
Oh gee…so many! The top would be China Mieville, Stephen King, Neil Gaiman, and Tanith Lee. Definitely scraping the tip of the iceberg there, though.

What are you working on now?
I’m working on the third book in the SHale City sries while conceptualizing the second Black Dog and Rebel Rose book. I tend to try and put out 1-2 titles a year.

What is your best method or website when it comes to promoting your books?
Instagram! The reaction to my character art has been huge.

Do you have any advice for new authors?
Put out quality work, use betas, hire a good editor, and never give up!

What is the best advice you have ever heard?
“Don’t be such a pussy, use a bigger f***ing brush.”

What are you reading now?
House of Leaves

What’s next for you as a writer?
Hopefully a film! Been waiting for that to finalize for the last year.

If you were going to be stranded on a desert island and allowed to take 3 or 4 books with you what books would you bring?
King Rat by China Mieville, The Lord of the Rings, House of Leaves, one of my own books (to keep honing the craft!).