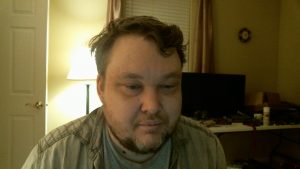 Tell us about yourself and how many books you have written.
I’m a mentally ill writer who has somehow managed to write ten or so books. I haven’t counted for a while, but that seems about right. Listen – if I can write ten books then anyone can do it. I graduated from the University of Iowa and tried doing temp work while writing novels on the weekends and at night but life intervened: I broke down with a terrible mental illness. The doctors think that it is paranoid schizophrenia. I had to spend fifteen years dealing with that in order to get ready to become serious about writing. During the last five years I have became more prolific.

What is the name of your latest book and what inspired it?
The Omniscience Cult was inspired by all the wonderful people I’ve met who are not like me: who are the charming and well-spoken and intelligent and successful people. I decided that some of my fellow geeks can be evil and that some of the “hated” popular kids can be wonderful and amazing and charming and perfect. I decided to write a book about that very concept. I also really like the idea of an ironic title – they aren’t omniscient or anything, just very scared and ignorant kids screwing up. That intrigued me.

Do you have any unusual writing habits?
Doesn’t everyone? I can write any time, day or night. I write most days now.

What authors, or books have influenced you?
I loved The Catcher in the Rye by JD Salinger, Grendel by John Gardner, and World War Z by Max Brooks. I also recommend Beloved by Toni Morrison and The Shining by Stephen King. Those are the classics, I think.

What are you working on now?
I am just starting a sci-fi novel which won’t have a marine lead or laser swords or big action set pieces but will instead have wonderful characters and interesting problems and developments. There will be romance, drama, and some interesting people in difficult – devastating – situations.

What is your best method or website when it comes to promoting your books?
I like cheap ads. They get the word out. I’m bad with people so I don’t do a good job of advertising my book.

Do you have any advice for new authors?
Yes, write a lot, read a lot, and re-read your work over and over. Memorize what you wrote. Show it to people and see what they think of it.

What is the best advice you have ever heard?
Use more direct action and better dialogue.

What are you reading now?
Moby Dick by Herman Melville and Konrad Curze The Night Haunter by Guy Haley.

What’s next for you as a writer?
I want to write the great American novel. Here’s hoping.

If you were going to be stranded on a desert island and allowed to take 3 or 4 books with you what books would you bring?
The Lord of the Rings. I haven’t read them since grade school and would love to lose myself in them.