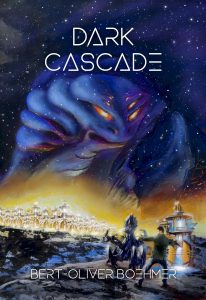 Every delay costs a world. Billions perish when raider ships peel off planetary crusts to feed their galactic civilization.

Kel Chaada had united humans, machines, and silicate aliens, but the hyper-tech invaders push the shaky coalition of former enemies to its breaking point. Kel has to work against his friends, ally with his sworn enemies, and strike where no one could foresee: The raider’s home galaxy.

The desperate plan is bold but cruel. Kel realizes he will become what he is fighting against: a destroyer of civilizations.

He rushes across the intergalactic void on a stolen enemy ship, riding a derelict warp bubble, piloted by zealous AIs with their own agenda. Can Kel’s small crew succeed where all space fleets failed?

Author Bio:
Bert-Oliver Boehmer is a science fiction writer and author of the award-winning novel “Three Immortals”. After two decades of working with innovative software and bioinformatics companies, he turned his passion for futuristic technologies, exotic biology, and artificial intelligence into the foundation of a vast space opera universe.

Bert-Oliver holds a degree in computer science and has traveled this planet extensively. Since 2020, he focuses on telling stories about what we might find elsewhere and elsewhen.

He lives with his wife and daughters in Southern California, where his Jeep leaves tire tracks on many trails.