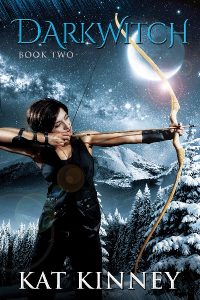 About Darkwitch by Kat Kinney

After twenty years of oppression, Lea Wylder has freed the Colony, one of the last human cities in the Nordvend, from the wolves. But freedom has come at a terrible cost. Radical forces threaten unrest. Wolf shifters and humans are more divided than ever. Lea’s nightmares have returned, except this time it isn’t her own death she sees—it’s Henrik’s, the wolf shifter she saved the previous fall, who possesses a terrible magic that has marked him as a target among humans and shifters alike.

Attacks on the Colony increase by the day. Something lurks out in the dark, frozen woods, just beyond what Lea can see in her visions, and she must discover who is hunting Henrik before it’s too late.