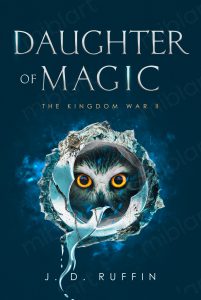 About Daughter of Magic by J.D. Ruffin

She’s been dead a thousand years. She’s angry. And now she wants her throne back.
Daughter of Magic is an action-packed adventure, the second book in The Kingdom War series. If you like fantasy, intrigue, and satirical humor, you’ll love this series.
Ancient, evil Queen Irina continues her plot to return to the living world — and to conquer it.
With her army on the border poised for invasion, Guardsman Keelan Rae and his team continue their desperate chase to save his beloved Healer. While his brother, Declan, travels to an ancient island seeking aid for their country’s sorely outnumbered military. When he meets the mysterious Keeper of Magic, he is forced to face his greatest fears.
Betrayed by her lover, Jess hurtles toward the same sacrificial fate as other kidnapped magicians. Her King-father rallies the nation to find her, but will it be enough?

Author Bio:
J.D. Ruffin is the author of the acclaimed, action-packed Kingdom War series, an epic fantasy launched in 2021.

J.D. was born in March 1970 in Nashville, Tennessee. He never really enjoyed reading until a friend loaned him a dog-eared copy of J.R.R. Tolkein’s Fellowship of the Ring. From that day, he was hooked, discovering fantasy authors Robert Jordan, Brandon Sanderson, R.A. Salvatore, Terry Goodkind and many, many others. Not long after, Brad Thor, Vince Flynn and a host of other thriller/suspense writers entered the picture and captured his imagination.

As a fourteen-year-old nerdy boy, J.D. and his friends would gather around the D&D dice for hours on end, trading reality for fantasy, if only in their minds. In his quest to “stump his friends” with an impossible campaign, he dreamed up a storyline that captured his imagination. Then… well… nothing happened. He grew up and went to work in a completely different world.

Too many years later, that story he dreamed pulled at the corner of his mind, demanding to be heard… to be written.

Hence, an author was born.