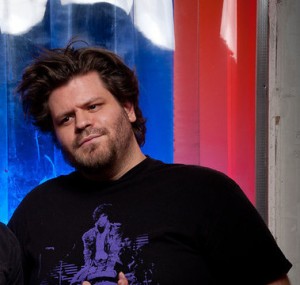 Tell us about yourself and how many books you have written.
Somehow I made a name for myself covering combat sports, namely kickboxing. I’m not sure how that happened, really, but somehow a kid who grew up obsessed with professional wrestling and books became big into the idea of punching and kicking people. I even did it myself for a while until the injuries stacked up and the idea of traumatic brain injuries really made me decide that it wasn’t for me.

Then I started writing about combat sports instead. It seemed fleeting, just something to do and to keep me writing, but then the UFC became really popular and I was starting to actually get paid to do it.

My passion was always literature, though, and I always knew that I wanted to be a novelist, the inspiration just wasn’t always there. I made a decision in late 2010 that I wanted to leave my secure, well-paying job in the world of Public Relations to focus on writing and that writing about professional fighting would be how I’d fund this dream of being a novelist. It turns out if you hate your job and stop caring they want to not pay you anymore (crazy, right?) and I found myself hustling for writing jobs.

I released The Godslayer in 2013 on a whim and was overwhelmed by how well it did, but it still wasn’t paying the bills. Somewhere around mid-2014 my wife finally pushed me to realize that I was miserable writing about combat sports and that I should just finish the novel that I was working on (Terminus Cycle) and stop putting off what I really wanted to do.

Since then I haven’t looked back.

I’m currently working on the follow-up to Terminus Cycle and just about done with it, so I guess you could say that I’ve written three books now. As for unfinished projects that have been shelved? I’d say at least another three.

What is the name of your latest book and what inspired it?
My latest book is Terminus Cycle and it was inspired by a lifelong addiction to science fiction.

Well, in part. I knew that I wanted to write a science fiction book for most of my life and I’ve always had ideas floating around but a big part of what helped to push me in the right direction was actually getting cable. That sounds ridiculous, right? I hadn’t had cable in a few years and made the decision to get it and I just ended up watching the Science channel a ton.

The Wonders of the Universe series hosted by Professor Brian Cox was really what reminded me about how much I love space and pushed me to start doing a lot of research. Research can either be dry or exciting and for some reason I felt that trying to delve into “hard science fiction” was the right path for me. Then, somewhere along the way, it really struck me how limiting our understanding of physics and our surroundings really are, plus I’m terrible at math and as much as I love the theoretical side of physics, a lot of the nuts and bolts don’t appeal to me.

Then we landed the Curiosity Rover on Mars and a friend made a joke about how the United States just colonized Mars and my mind went into overdrive about space colonization. It reminded me of a lot of the things about science fiction that I’ve always loved and I decided to go the route I did, which was inspired by real science but not obsessed about it.

Do you have any unusual writing habits?
Not really. I used to only write late at night because it tends to be when my mind is the clearest, but that led to a lot of what I’ll call binge and purge writing. I’d write a ton, just write until I pass out, then wake up and some of it might be brilliant and untapped genius, but most of it is just awful and should never see the light of day.

I keep pretty normal (if not still late by most standards) hours during the day and try to set a basic goal for each day and week when it comes to writing, editing and working on freelance jobs. I’m not sure if this is considered odd but a lot of the time I’ll write for a burst of 20 – 30 minutes, then play a game for a bit before switching back. It tends to help me clear my mind if I find myself stuck and work out any frustrations. The game I play is Mount & Blade: Warband for the most part and I’ll usually just leave it open for a while so I can quickly tab in, fool around with some swordplay, then get back to writing.

What authors, or books have influenced you?
When the Star Wars Expanded Universe books first started coming out in the early 90’s I was all over them. I was also a kid in second grade but that didn’t stop me. I’d say I read those for at least a solid six years along with Stephen King and a few other things before I moved on to more heady stuff. While I’m not overly fond of Star Wars or Stephen King anymore it’s hard not to recognize how they helped to nurture a nerdy kid who loved to read at a young age.

What are you working on now?
I’m working on the follow up to Terminus Cycle at the moment, that is my main project. I have a few other projects that I shelved but might open up and revisit once in a while when I’m frustrated or in need of some changes.

It’s a real joy to be working on book two of a series and to start playing around in the sandbox that I constructed in the first book. This is the kind of stuff that I really love when it comes to storytelling and I think that it will really shine through on this one.

What is your best method or website when it comes to promoting your books?
There isn’t a best method, I’ve found. There are times for subtle, targeted advertising and times for a shotgun blast to try to reach a new audience.

What’s perhaps the most interesting and frustrating thing is that the market is rather fluid and changes all of the time. There are a lot of people that want to offer advice, marketing tips and services to writers and a lot of them are just awful. There’s a bit of a goldrush going on in the ebook market right now and there are a lot of people lining the streets with snake oil elixirs. That being said, it’s hard not to appreciate the people who offer frank, honest advice to other writers and share their experiences with them. Blog posts from such authors have been helpful beyond measure to me and have pointed me to some really top notch services and promotional ideas.

Do you have any advice for new authors?
Just write.

Sooner or later you’ll start writing stuff that you actually enjoy and maybe eventually some day other people will enjoy it as well.

What is the best advice you have ever heard?
That there is no right answer sometimes.

What are you reading now?
The Dragon’s Path by Daniel Abraham. I felt like I needed a bit of a break from science fiction so I decided to read some fantasy.

What’s next for you as a writer?
To keep writing.

If you were going to be stranded on a desert island and allowed to take 3 or 4 books with you what books would you bring?
Dune by Frank Herbert, VALIS by Philip K. Dick, Gravity’s Rainbow by Thomas Pynchon and Slaughterhouse-Five by Kurt Vonnegut