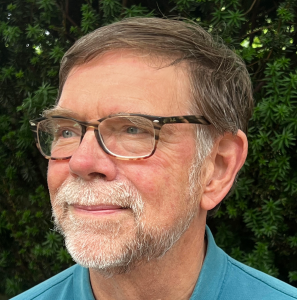 Tell us about yourself and how many books you have written.
I used to have a day job in Washington, D.C. where I wrote a lot about reality, in the nebulous intersection of government, public policy, and corporate consulting.

I grew up in suburban Long Island. My wife and I raised two daughters in Northern Virginia. I attended schools in Ohio and North Carolina, and have travelled as far Southwest as the Galapagos and as far Northeast as Katmandu. And Further. These days, when I’m not writing, I spend my time playing the cello, enjoying jazz and blues, fighting climate change, and filling the numerous bird feeders in our back yard.

My first published book is “The Book of Mathew L.” But it won’t be my last.

What is the name of your latest book and what inspired it?
My first published book, “The Book of Mathew L.” grew out my experiences attending college and university in Ohio and North Carolina, and my friendships with many past and present grad students who often stumbled (and usually got back up) on the long path to a degree. I’ve also built on the many challenges of living a responsible, rewarding life while seeking family contentment and professional success, while being true to hopes for social justice and a fair and equitable society.
In the writing I’m doing these days, I really enjoy building upon the idea of strong people emerging out of small towns and facing the social and cultural changes in America over the last half-Century, many of which I was an active participant in.

What authors, or books have influenced you?
John Updike, for sure. Anne Tyler, for her many unique characters who have trouble finding their place in their families and communities. Pat Conroy, for his ability to give a rich narrative to the people in the part of America he knew best. E.L.Doctorow, Mark Twain, Aldous Huxley, Vladimir Nabokov, and many others.

What are you working on now?
The Book of Mathew L. features a young man who grew up in a large family in small-town Ohio in the 1950s. I’m working on several other books that focus on his siblings, and members of his extended family, and the different directions they head. My next planned book, Carrie: An American Classic, explores what happens to his youngest sister after she spends several years exploring the great American West in the mid-1960s and comes back to town when she needs a break. The Larsen family will be a rich source of some interesting writing.

Do you have any advice for new authors?
Write, and rewrite, and don’t be impatient if you rewrite again. Read it out loud, to find out where the prose gets awkward. Share your work, and ask for advice, and be humble in taking the advice.

What is the best advice you have ever heard?
Take things patiently. When you think you’re there, double check.

What are you reading now?
At the moment, I’m re-reading Philip Roth’s “The Ghost Writer.” I’m planning to take Colson Whitehead’s latest novel, “Harlem Shuffle,” as a beach read in a few weeks. I re-read “Lolita” recently.

What’s next for you as a writer?
Besides working through the in-process stories about Mathew L’s family, I would like to plot out a book about a struggling musician — probably a jazz musician. A common undertheme in my books about the Larsen family is how they were affected by their mother’s training as a classical pianist, and the piano lessons they took as children. Music is a large part of my psychological makeup.

If you were going to be stranded on a desert island and allowed to take 3 or 4 books with you what books would you bring?
John Updike: The Early Stories: 103 stories he wrote 1954 – 1975. Something to give me a better appreciation of Greek Mythology — Maybe Bullfinch? Some Nabokov that I haven’t read before. I’ve never read any Jane Austen. I’m definitely open to suggestions.