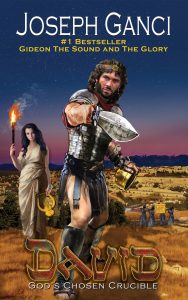 David is every man’s man, an outlaw prophet, a man of war, and a man of God.
He is a ruthless warrior, an ardent lover, skilled musician, and poet-philosopher.
God sees in him the heart of a lion, the tenacity of a bear, and an ever-faithful man of action.
God calls an unlikely and lowly shepherd boy to become the king of the Jews and fighting prince of Israel.
David overcomes all odds in escaping every snare, evading every trap, and learns from every encounter, growing in understanding and effectiveness in the love of his Creator.
He protects, defends, and enlarges the stakes of Zion, the resting place of God’s chosen people.
David reaches the pinnacle of all worldly success. He marries the love of his life and is the master of all that he surveys, even surpassing his imagination.
Witness the hair raising and narrow escapes from the vengeful King Saul.
Eventually, and in desperation, David seeks sanctuary with Achish, the Philistine prince that calls David a friend, even giving him a Philistine village and inviting him to battle against Israel.
Be a party to the kidnapping of David’s two wives and his ferocious battle against the shapeshifting Amalekites.
Be present as he wins them back and, in doing so, captures a vast treasure trove of flocks, herds, and gold.
Come and join the battle at Mount Gilboa and the destruction of Saul and his son’s foretold by the witch of Endor.
Celebrate the fall of the city of waters and the last puzzle piece needed to establish the empire of Israel.
Look down from the high walls of Rabbah and learn of the needed destruction of Uriah the Hittite.
Stand invited to the marriage ceremony of David and his soulmate Bathsheba, the future mother of king Solomon, the future monarch of Israel.
David and Goliath, the giant, are one of m many Old Testament Bible books. These Christian Bible stories are one of the favorite Christian books for women. The Christian bible is a Christian book that spans from creation through revelation to the legacy of Jesus.

Author Bio:
Joseph Ganci was born in Beth-Israel Hospital, N.Y. He is the firstborn so dedicated to God by the laws of Israel and is the son of a Joseph. A confirmed Levite and Highpriest. Joseph is a Vietnam combat veteran currently residing in Huston, Texas. He has fathered five daughters and has five grandchildren.