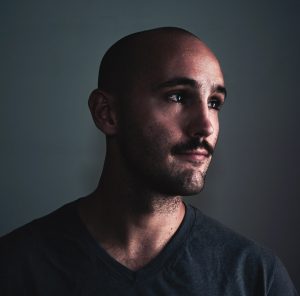 Tell us about yourself and how many books you have written.
I’m writing from Denver, Colorado and I’m a chronically artsy kind of guy. Between writing, playing music, photography, illustrating, etc… I keep myself way too busy for words.

It’s a real problem, honestly haha. Working on random shit until three in the morning is fun, but I don’t know how healthy it is. Whatever.

My girlfriend is the same way, though. So that’s nice. She’s a cutesie cuddle monster and encourages my creativity like you wouldn’t believe. Don’t tell her I said that. It’ll go to her head.

I’ve written three books. The first is called Shorts & Shit, an anthology of short fiction and poems. It got reviewed well, and it’s on pre-order at the time of this interview.

What is the name of your latest book and what inspired it?
Shorts & Shit, being the last book I’ve actually gotten published, was a collection born from experimentation.

Nothing is all too experimental about it in a snooty-literature sense, but in each story and poem I intentionally tried to push my understanding of storytelling and it’s many many literary devices.

Throughout writing the book, I was reading a ton of Shirley Jackson, Roald Dahl, and H.G. Wells’s short stories. A few things really caught me reading these authors. For one, I fell in love with Shirley Jackson’s dark and subtle peek into people’s minds. Roald Dahl’s whimsical plot twists and wonderful, quick descriptions of people was something I envied more than anything. H.G Wells’s settings blew my mind along with his masterful use of narrative devices.

Every time I read a new story from one of those great authors — among many others — I immediately took notes of things I admired and tried to work them into new story ideas of my own.

Do you have any unusual writing habits?
I love creating worksheets and then using them for my own writing… Maybe I’m just being a huge nerd about it, but there’s something really fun about breaking down some aspect of writing, then running myself through it with a nice worksheet. Ooh baby, do I love organization.

What authors, or books have influenced you?
Like I said before, Shirley Jackson and her subtle and understated stories have a way of getting under my skin. Roald Dahl has really helped me embrace my dark side and realize you can write some pretty fucked up stuff while still maintaining a whimsical feel. Love it.

H.G. Wells’s “A Dream of Armageddon” is by far one of my favorite short stories of all time. The narrative set up, the amount of feelings and steaks he sets up, the way he builds a plot just through some raggedy guy talking on a train, how his omission of certain things — while still sounding very natural — keeps his science fiction evergreen… Mmhmm! AMAZING! Just go read it.

Another story — and author in general — who’s stuck out to me is Neil Gaiman’s “Forbidden brides of the faceless slaves in the secret house of the night of dread desire.”

Mouth full, I know. But it’s a great read and really opened my eyes to how one can play with form and perspective in fun and effective ways.

Ooh, I also absolutely love love love Billy Collins. If you’re at all into poetry, or even into the idea of telling girls at coffee shops that you like poetry, you should read any of Billy Collins’s collections. Each poem is a little story and they consistently teach me how important surprise and honesty are to storytelling, be it through poems or novels.

What are you working on now?
I’m working on a novel titled Mr. Strickham’s that’s set in a magical world and follows a young man who gets clinically diagnosed as boring haha. In order to cure his boring curse, he decides to leave home and go fight a Dragon. Will it work? Who knows?… Well, I know.

Also, I wrote a book of poems for my girlfriend called “Fuck it. I Like Poetry and I Love You” that I gave to her on her birthday. It was too cute for words, but I’m tweaking some old poems and adding to the book in general and will put that out sometime in 2021!

And I’m always writing / working on a short story or two here and there. Hopefully I can put out another anthology in another year or so.

What is your best method or website when it comes to promoting your books?
For one, getting a Reedsy review has been very helpful and accessible. Other than that, Instagram is great. Likewise for Facebook. Word of mouth is scary, but works great, too.

My all-time favorite social platform, though, is Medium. It’s a great platform to put out poetry and get paid for it, too. And if you can get your work published and curated, your stories earn more for longer.

One thing that’s really helped me out has been MailerLite (https://bit.ly/MailerLite-is-greaterlite if you’d like to check it out). Because a mailing list is super important for Indie Authors, I have been using it to run my book’s landing page where I am actually offering up my book for free.

I found this strategy of offering a book for free to build a mailing list through this guy August Birch, The Book Mechanic. Kind of a corny name, but the man knows what he’s doing. Found him on Medium. He helped me understand the importance of building a mailing list and how valuable it is as a younger, indie author.

Do you have any advice for new authors?
This dude Thorndike did an experiment one time. Probably ages ago now. But he had 3,000 people try to draw a bunch of 4-inch, straight lines, blindfolded.

They were shitty at it.

Basically, Thorndike found that repetition without feedback gets you nowhere.

Just because you write endlessly in your little writing cave doesn’t mean your moving your pen in the right direction. No matter how painful it is and no matter how awkward people’s, “Yeah, no, it’s really nice. It’s cool that you’re writing,” is, show people your writing.

Share share share some more and when people give you feedback, remember that they’ll never have the solution, but they can sure as hell point out the problem.

I recommend signing up for a critiquing community like Scribophile. If you can afford it, hire a fancy editor. If you have a significant other, let them read it earlier than you want them to.

You get it. Get some feedback on your shit or it will always stay just that: shit.

What is the best advice you have ever heard?
From Hemingway, in a book of his quotes concerning writing, he said gave some advice that was subtle but stuck with me in a big way. That’s his whole schtick, I guess. But he said just think about your feelings — get in touch with those, your feelings that is, if you haven’t yet. — and then try to imagine the exact events that gave you those feelings and write them down.

It’s kind of like, “Duh!” But really, I wasn’t doing that before. And I’ve read plenty of people’s writing that still doesn’t do that.

It was this chasing after the “real thing” that Hemingway was known for and taking that bit of advice to heart that really helped mature my writing.

What are you reading now?
Oh, I love bouncing around and reading a bunch of different short stories from different authors. Takes me ages to work through a collection, but I like it that way.

Also, I am obsessed with Duolingo stories. And yes, I mean the language app. What can I say? They’re fun and I read them when I poop.

What’s next for you as a writer?
Well, to keep on writing!

My goal is to grow my mailing list and keep putting out poems, shorts, and novels for a long time to come.

I have started on my next anthology of short fantastic fiction and the common thread between each story so far is how normalcy can be just as surprising and delightful as exotic and exciting plots.

For instance, one story surrounds a young couple plagued by financial stress after they find that no one will buy the house they’ve sunk all their money into because, well, it’s super haunted.

Another story is about a man who’s nearing retirement, who gets his job displaced by an enchanted rock. Big slap to the face.

If you were going to be stranded on a desert island and allowed to take 3 or 4 books with you what books would you bring?
1. “Hitchhikers Guide to the Galaxy” by Douglas Adams
2. “The Bartimaeus Trilogy” by Jonathan Stroud
3. “Skin and Other Stories” by Roald Dahl
4. “Aimless Love” by Billy Collins