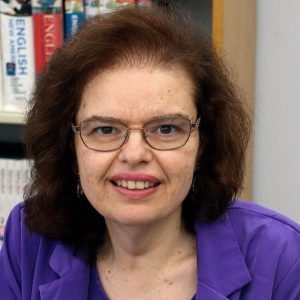 Tell us about yourself and how many books you have written.
I’m a reference librarian at a public library on Long Island and a member of Sisters-in-Crime, International Thriller Writers, and the Cat Writer’s Association. I have a BA in English and an MLS in Library Science from Long Island University. My three published novels include Cloudy Rainbow, A Stone’s Throw, and Between a Rock and a Hard Place (Solstice Publishing, 2016) that has been on the Amazon bestseller list for cozy mysteries. My romantic comedy novella, When Jack Trumps Ace, was published in February 2017. I have also written articles and short stories for several anthologies of various genres. My third Cobble Cove mystery, Written in Stone, will be published in Spring 2017. I live on Long Island with my husband, daughter, and two cats.

What is the name of your latest book and what inspired it?
A Stone’s Throw, the first of my Cobble Cove mysteries, was released on March 8. It was originally published with another publisher in 2015. The new edition has an additional chapter and updated editing. The story was inspired by a combination of experience and imagination. The main character, Alicia, is a librarian like me, and she shares some of my personality traits. I also have quite a bit in common with her love interest, John, who is a newspaper publisher and also writes mysteries. I worked on my college newspaper and was always interested in writing. John’s father, Mac, is based on a man I worked with in college who ate peanut butter and jelly sandwiches every day for lunch. I also based the Siamese library cat on my own Siamese, Oliver. As for the plot, that was more imagination than experience.

Do you have any unusual writing habits?
I don’t think they’re that unusual, but I write very early in the morning. I’m up before five sitting at the computer working. I also rarely outline my plots. I often surprise myself by my endings and twists because they come to me as I write.

What authors, or books have influenced you?
As a librarian, I’ve always been an avid reader so have been influenced by many books and authors. I was hooked on gothic romances and romantic suspense novels when I was a teenager and read almost all the books by Phyllis Whitney, Victoria Holt, and other authors of that genre. I later developed a love of cozy mysteries, which you might consider my series. I have a collection of cat fiction from authors such as Carole Nelson Douglas, Rita Mae Brown, Shirley Murphy, etc. I also enjoy some historical fiction and time travel novels. One of my favorite titles was The Eight by Katherine Neville. Currently, I enjoy books by Mary Higgins Clark and Nora Roberts, her standalone books as well as her JD Robb “In Death” series. I’ve also been sampling lesser known and debut authors of various genres.

What are you working on now?
I’m on the edits for my third Cobble Cove Mystery, Written in Stone, that I anticipate will be out in April. I also have a standalone psychological thriller, Sea Scope, that I’ve been querying to literary agents in the hope of landing a deal with a larger publisher, although I’m extremely pleased with my current publisher, Solstice Publishing. I have many other ideas and books/stories in different stages of completion.

What is your best method or website when it comes to promoting your books?
I’m active on social media – FB, Twitter, Google+. I have a website/blog: https://debbiedelouise.com where visitors can also subscribe to my twice monthly newsletter that includes a monthly contest. My cat character, Sneaky, also has his own blog where he interviews other pet characters and pets of authors. It’s located at https://sneakylibrarycat.wordpress.com. The Cobble Cove Chat Facebook group is hosted each month by a different character from my series and where readers can interact with them and also enter monthly contests.

Do you have any advice for new authors?
Don’t give up. Write because you love it, and don’t try to change the way you write to satisfy anyone but yourself. Be proud of your work and strive to improve it to keep your vision of what you want to share with readers. Support other authors and learn from them.

What is the best advice you have ever heard?
The same as I just gave. Most important of all, to keep writing.

What are you reading now?
I’m judging a few contests at the moment so juggling a couple of books. I was asked, as a librarian, to judge the Romance Writer’s of America contest I’m also judging the Cat Writer’s Association contest that I judge and enter each year. For my own pleasure, I’m reading J.D. Robb’s “Echoes in Death” and Peter Swanson’s “Her Every Fear.”

What’s next for you as a writer?
As I mentioned above, I’m hoping to complete several projects and maybe start something new. I’d like to find a literary agent. I have an idea for another series and standalone novel. Lots of ideas but not enough time to devote to all of them. I’d also like to continue the Cobble Cove series, but I’m looking toward taking a break after my third and working on other projects.

If you were going to be stranded on a desert island and allowed to take 3 or 4 books with you what books would you bring?
That’s not an easy question. Because I have such a huge TBR pile, I would not bring something I’ve already read. I’d probably want to bring a few books that have been sitting on my home bookshelf gathering dust because I haven’t had time to read them yet. I also might like to bring a book or two on writing including marketing and social media promotion and maybe The Guide to Literary Agents, so I could research finding one while I wait for rescue.