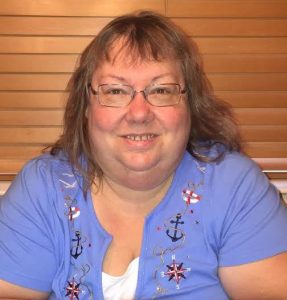 Tell us about yourself and how many books you have written.
I hail from Central Illinois, Yea! Land of Lincoln and Hurrah for the Cubs! Though I have no children, I am “Mama” to two dogs, Honey, an American Stratford Terrier whom I rescued from the pound, and CeCe, a Chihuahua. Honey likes to cuddle at my feet and her snoring is the only music I listen to when I write. I count myself lucky to have been able to visit some of the places on my bucket list, London, Paris and Rome, and I’ve used this fantastic cities as settings for my YA series, a work-in-progress. I’ve also kissed the Blarney Stone despite the fact I’ve always been full of blarney.
My picture book, CALAMITY CAT, is with the Houghton Mifflin Harcourt publishing company, and I’m hoping it will be featured in their 2017 Curious World website. THE DRAGON’S RING, a young adult romantic fantasy/fairy tale, is now available at Amazon, B & N, Smashwords and Kobo. I’ve also had published two short children stories in Guardian Angel Kids’ e-zine and won first place in writing contest.

What is the name of your latest book and what inspired it?
THE DRAGON’S RING, released July 28, 2016, is basically a love story/fairy tale about a princess, a knight and a unicorn. I’ve always loved unicorns, and once had a curio cabinet filled with ceramic, wood and glass unicorn figurines. When my nieces and nephews were young, I’d write stories for them, and this is one of those stories. Over the years I’ve revised the story, and this one is very different from the original version. The princess no longer waits at the castle for the knight to return from his quest. She follows him, and becomes the heroine in the story.

What authors, or books have influenced you?
My love of writing began with a love of reading. My first stories were by Dr. Seuss. I graduated to Little Women by Louisa Mae Alcott and Jane Austin’s novels. After that my school library became my second home, and I devoured as many books as possible. My family used to complain because “my head was always in a book.” Pinpointing one author or books that influenced me is impossible, because I learned from so many.

What are you working on now?
Since 2013’s NaNoWriMo I’ve been devoting writing time to a young adult series. I wrote three of the books in this series during my first experience with NaNoWriMo, and in November, 2014, I added another. It’s important to note that though written as a series, each book can standalone. The first three follows a young girl to London, then Paris and Rome. In each city she becomes involved in a mystery mixed with murder. It is in London where she falls in love with a boy in her tour group, and after that they are inseparable and work together in solving the crimes. I began this series in 3rd person POV, but am revising to 1st.

What is your best method or website when it comes to promoting your books?
I love twitter, but also promote on my Facebook page and Tumblr. I’ve been fortunate to have been interviewed by several authors, and these interviews have been posted on their blogs. I also designed bookmarks with a gold ring tied onto them to pass out at libraries and author visits.

Do you have any advice for new authors?
My advice is to keep writing and submitting, attend conferences, join a critique group and participate in online webinars. After receiving tons of rejection letters, one can become discouraged, but don’t give up. I have a file cabinet filled with rejections, but I didn’t stop trying, and now have two books published.

What is the best advice you have ever heard?
I remember someone telling me once to stop worrying. Worrying doesn’t change an outcome, it just causes loss of sleep. I have learned to put my trust in God, to let go and not worry. What will be, will be, but it’s up to me to keep working towards my goal.

What are you reading now?
I recently finished reading Tokens and Omens by Jeri Baird, whom I happen to know and was in a critique group with at a conference. It’s a fantastic read and I highly recommend Jeri’s book. Jeri and I have reconnected on Facebook and twitter, and we help promote each other’s book. Our books both came out around the same time.
I also just finished reading Reminding Me of You by Kathy Bosman, a fun read about a romance.

What’s next for you as a writer?
My goal is to find representation with a literary agency. That way I can devote more time to writing as my agent would be handling the submission end.
I want to finish revising my YA series and find a publisher for it. The first book, set in London, is ready, and I am sending out Query letters for it. To keep it fresh, I had to add new content today because the Cubs won the World Series. One of my characters is a huge Cubs fan, but when I first wrote his dialogue, the Cubs had been under the curse. Now he’s talking about the winning game.

If you were going to be stranded on a desert island and allowed to take 3 or 4 books with you what books would you bring?
Only 3 or 4? Kill me now! I guess I would take 4 of the 6 Jane Austen’s novels. She’s my favorite author and I never tire of reading her books. Pride and Prejudice would definitely be one of the four. In my YA series, one of my characters is named Darcy.