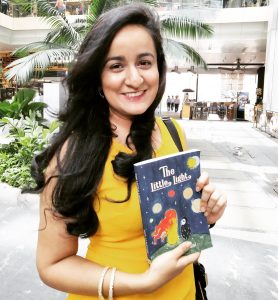 Tell us about yourself and how many books you have written.
I’m a debut author. It took me eight years of trial and error to get to this point. In 2013, I tried getting published the traditional way and failed miserably. Five years later, I decided to try again. I couldn’t be bothered with the unnecessary hassle of querying agents, so I started my own publishing business.

The rest, as they say, is history.

I write spiritual and metaphysical stories inspired by world mythology.

What is the name of your latest book and what inspired it?
The Little Light is a story about a wise and curious soul that meets the crazy cosmic family before it’s born on earth.

The idea came to me when I was lying in bed alone in my apartment in Japan. I was contemplating the vast nature of the universe when I suddenly thought, “How nice it would be if I could invite the planets over for a discussion on life, love and the larger purpose for our existence.”

I promptly opened up my notebook and drew a sketch of what the mythological Nine Celestial Beings would look like if they were ‘updated’ for the modern era. The idea ruminated in my head for four years before I finally sat down to write the story.

Do you have any unusual writing habits?
I like to write at night, when the rest of the world is sleeping. I gaze out of my window a lot and contemplate life. I endlessly come up with questions that have no answers. Is that unusual?

Not in any particular order, of course.

What are you working on now?
The sequel to The Little Light – the second book in The Guardians of the Lore series.

What is your best method or website when it comes to promoting your books?
I think for debut authors it’s worth personally reaching out to book bloggers and other authors – especially those who read and write books in genres that are similar to your own. They’re more likely to leave a ‘genuine review’ and appreciate your work early in the game.

Do you have any advice for new authors?
Don’t you dare give up.

What is the best advice you have ever heard?
It’s your life, man. Do what you want. As said by my best friend from high school.

What are you reading now?
Circe by Madeline Miller

What’s next for you as a writer?
Developing my publishing house, Mith Books. I’m interested in working with people who want to publish their own books – especially in the non-fiction genre. If you don’t know where to start, let me help. I’ve learned it all the hard way so you won’t have to.

If you were going to be stranded on a desert island and allowed to take 3 or 4 books with you what books would you bring?
My Kindle… I know – cheating right? Then again, knowing my luck, the battery will probably die just as the story is reaching its climax. So in all seriousness…

The Little Prince by Antoine de Saint-Exupéry
The Witches by Roald Dahl
Leader: 50 Insights from Mythology by Devdutt Pattanaik
1Q84 by Haruki Murakami

Can I sneak in a fifth book? I know… cheating, right?