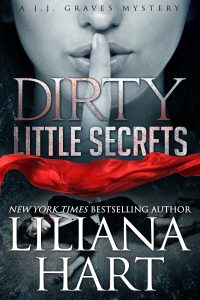 From New York Times bestselling author Liliana Hart comes a series that will knock your socks off!

J.J. Graves has seen a lot of dead bodies in her line of work…

She’s not only in the mortuary business, but she’s also the coroner for King George County, Virginia. When a grisly murder is discovered in the small town of Bloody Mary, it’s up to J.J. and Detective Jack Lawson, to bring the victim justice.

The murders are piling up…

When a popular mystery writer shows up on J.J.’s doorstep with plans of writing his new book about the Bloody Mary Serial Killer, J.J. has to decide if he might be going above and beyond the call of duty to create the spine tinglers he’s so well known for.

Author Bio:
Liliana Hart is a New York Times, USA Today, and Publisher’s Weekly Bestselling Author of more than sixty titles. After starting her first novel her freshman year of college, she immediately became addicted to writing and knew she’d found what she was meant to do with her life. She has no idea why she majored in music.

Since publishing in June of 2011, Liliana has appeared at #1 on lists all over the world, and all three of her main series have appeared on the New York Times list. Liliana is a sought after speaker, and she’s given keynote speeches and workshops to standing-room-only crowds from Hawaii to New York to London.

Liliana can almost always be found at her computer writing, or hanging out with her real life hero, Scott Silverii. They call Dallas home, and have five children.