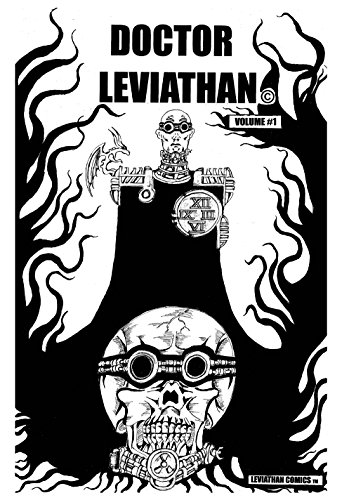 Doctor Leviathan volume #1 is a graphic novel that takes place in the future where there are millions of super-powered madmen, monsters and murderers but no heroes to confront them. Mankind lives on the brink of enslavement as these criminals terrorize the world. Within this graphic novel is the story of someone that suddenly appears to rise up and make a stand against these evil madmen. Some call him a monster while others say he is a saint, but he is all that stands between mankind and its enslavement. This mans name is Doctor Leviathan. The first story in this graphic novel is about a man named siege and his group of villains and monsters, who kidnap the daughter of a judge and plan to torture and execute her on live television. The second story within this graphic novel is about a man, who became a priest to escape from his past crimes as a powerful criminal. He painfully finds out that he cannot escape his past as he is confronted by a group of evil villains seeking revenge. The third and final story in this graphic novel is about the mysterious and grisly murders of several powerful groups of super-criminals. The police search for their killer as more and more super-villains are found slaughtered. Clues of these murders lead into the dark underground sewers of Detroit city. Police authorities know that what ever is hunting and murdering these criminals may eventually start preying on the innocent civilians within the city.

Get This Horror Book.

James Banks was born in Indianapolis, Indiana in 1963 and has lived there for most of his 53 years. He attended Bishop Chard high school and Warren Central high school and also attended IUPUI university. James Banks has admired comics since his youth and began drawing them at an early age. During the early eighties James Banks started working to publish his first comic book as the independent comic book industry boomed. While working as the night shift manager in a neighborhood grocery store, James Banks created his first major comic book character called Doctor Leviathan. He self published his first comic book in 1996 and later started up Leviathan comics as a independent comic book publishing company.