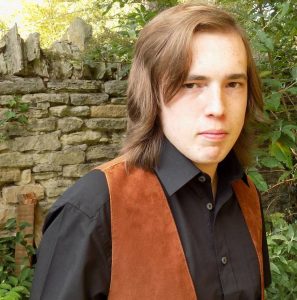 Tell us about yourself and how many books you have written.
My name is Dominic Hodgson, I’m 18 years old and am about to go off to university. Writing has always been the greatest passion in my life, with my only ambition being to making a living out of the stories my wondrous mind continues to produce…even when I don’t want it to. So far I’ve only published one novel, ‘Gift Of The Mancynn’, which is meant to be the opening novel to a much larger science fiction/fantasy franchise, ‘The Ragnarök Chronicles’, of which this comes under the subseries ‘2016’.

What is the name of your latest book and what inspired it?
As I’ve already mentioned, if this is displayed in order, my debut novel is called ‘Gift Of The Mancynn’. It follows a supernaturally enhanced teen, Philip, as he and his companions learn of an ancient, inter-dimensional plot to turn Earth into a weapon for an alien war, and that he, Philip, is the key to its completion. The whole story of its inspiration is best spelt out in my early posts at dominichodgson.wordpress.com, but long story short I needed a way to open this generally planned franchise, and the events of this book, after some other possibilities were rejected, seemed like the most logical way to introduce my worlds.

Do you have any unusual writing habits?
Having not spoken with many other authors, I don’t know what constitutes ‘unusual’, but if it’s going to be anything I guess it would be the fact that I tend not to write chronologically in the latter half of the text, when working with prose at least. There just something about passing the halfway point of the story that gets me thinking about the exciting conclusion (I usually plan out the skeleton of the story beforehand and so know what will happen here), leading me to skip the next few chapters to write said finale. This can lead to come corrections for the sake of continuity later on once I’ve gone back and written the skipped chapters, but I find that’s how I work best, as that’s the order I think about the plot in.

What authors, or books have influenced you?
I try not to be consciously influenced so that I can be as original as possible. That being said, I can never tell if anyone’s had a subconscious influence on me. If this is the case, the likely candidates are the works of JK Rowling, Terry Pratchett, Garth Nix, Eoin Colfer or Jasper FForde.

What are you working on now?
Prose-wise, I’m working on the third draft of my second novel, Archk of Angels, the sequel to my debut novel, Gift of the Mancynn, and the first draft of my third, Celestial Coup. Aside from this, I write what at the moment might as well be called ‘fan’ scripts for TV shows I’d like to write for in the future (*cough* *BBC’s Doctor Who*) as well as those of some original show concepts. But while I should have ample time to write in the summer, I cannot predict what affect my going to university in the autumn will have on the above.

What is your best method or website when it comes to promoting your books?
Having only just started, I don’t really know for sure, but I would have to guess Twitter, as that’s what I’ve been using most for the purposes of promotion.

Do you have any advice for new authors?
Don’t expect instant success. That will likely lead to paranoia and depression. Trust me, I know from experience. You have to wait both for people to realise your book is out there and for them to actually read it before they pass judgement in the form or reviews or spreading the word.
But before this stage, while some editors/publishers might try to get you to change your story to fit ‘demand’, have faith in your creation (within reason, sometime their advise makes sense). Besides, how are new trends set if not with variety?

What is the best advice you have ever heard?
Honestly, I have no idea. Sorry. I kind of just worked it out as I went along, rather than listening to others. Because I’m stubborn like that, for better or worse. I hope that’s okay.

What are you reading now?
Unfortunately I don’t have much to read at the moment, but I am slowly making my way through ‘Good Omens: According to the Nice and Accurate Prophecies of Agnes Nutter, Witch’ by talented authors Terry Pratchett and Neil Gaiman.

What’s next for you as a writer?
Once I’ve finished with this tetralogy subseries of my epic (by the archaic meaning of the world, but apply the other, more common, definition if you hopefully will) franchise, I plan to write a short horror story anthology novella under a pseudonym before coming back to the next subseries which should be a trilogy. I also plan, when possible, to further work on my scripts.

If you were going to be stranded on a desert island and allowed to take 3 or 4 books with you what books would you bring?
Oh, this is difficult…Okay, I’ve got my four, but before I go into them, I’d just like to say that were I able to give a fifth, it would be ‘The Lord Of The Rings: The Fellowship Of The Ring’. I just wanted to put that out there.
1. ‘Harry Potter And The Order Of The Phoenix’: it’s hard to beat a good Harry Potter book, but I struggle with favourites as a general rule, so I went with the longest one.
2. ‘The Big Over Easy’: a fun, upbeat, very imaginative crime mystery. Always good in a dark moment.
3. ‘The Complete Stories Of Sherlock Holmes’: I’ve been meaning to read this for a while.
4. ‘How To Escape A Desert Island’