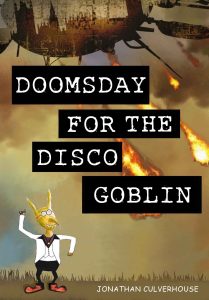 About Doomsday for the Disco Goblin

Holiday giveaway: This book will be free in the Amazon Kindle bookstore between December 12th and 16th.

When an unexpected school trip takes an unscheduled detour, Angelica finds herself in a hidden world buried deep beneath the streets of London. Here she will face terrifying dangers and encounter many bizarre and nightmarish creatures. However, none could be stranger than Plopbottle, a tiny goblin who dreams about escaping to the surface whilst enjoying his secret collection of topsider dance movies and disco memorabilia.

With her unlikely ally, Angelica will have to take on a ruthless Underkingdom boss and try to stop a colossal machine, which threatens to engulf the world in a planet-wide conflict. But will she ever get used to her little friend’s taste in music?

Author Bio:
Hi, I live in rural Wiltshire, not far from Stonehenge. During the pandemic I reworked an earlier version of Doomsday for the Disco Goblin and then published it along with two further books in the Underkingdom series.
As well as writing, I also enjoy knitting and knitting design. I have recently uploaded a free Disco Goblin pattern on the Ravelry website to go with book one. Further fun free patterns are planned.