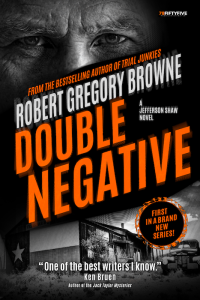 On the anniversary of his wife’s passing, Jefferson Shaw—ex-cop, retired Marine, and grieving widower—packed a duffle bag and climbed into his pickup truck to take the road trip they had been planning together before she died.

Now, when engine trouble temporarily strands him in Rosewater, Texas, an impulsive act of chivalry toward a battered young woman lands Shaw in more hot water than he ever could have anticipated.

Before he knows it, he’s caught up in a decades old family drama, a senseless murder, and the search for a missing grandson that soon has him staring down the barrel of a malignant narcissist’s gun.

He has written teleplays for Showtime, Saban, Marvel, and Fox Kids, and has published multiple novels under multiple names in multiple countries with St. Martin’s Press, Penguin Dutton, Signet, and Harlequin. His short stories have appeared in Lee Child’s Killer Year and Sandra Brown’s Love is Murder.

His novel Kiss Her Goodbye was produced for television by CBS TV/Sony Pictures. His novel The Paradise Prophecy was optioned by Temple Hill Productions for ABC Television.

He lives in California with his wife, cat, two dogs, and Jura coffee machine.