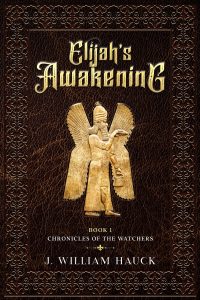 An Immortal, a fallen world, a choice.

Elijah is a watcher, part of an order of immortals placed on earth to teach and guide primeval humans. When a rogue watcher leads a third of the order in rebellion, Eli must repair the damage. Thousands of years later, the struggle to influence humanity has only intensified.

It is 1914, and the renegade watchers have started a world war. In his attempt to stop them, Eli is wounded and meets the extraordinary French nurse, Michelle. Michelle tries to unravel the truth behind the mysterious Eli, which leads to only further intrigue, including her own hidden bloodline. Will Michelle discover Eli’s true identity and embrace her destiny? Will Eli stop the rebellious watchers and save the world? Or will the dark forces of evil prevail? Time is running out.

Elijah’s Awakening is the first thrilling installment of the Chronicles of the Watchers series, an immortal’s struggle to save humanity and a mortal’s quest to realize her divine power.

Author Bio:
J. William Hauck is an American author whose novels revolve around pivotal moments in time. His love for history began as a boy, listening to his grandfather’s tales of World War I, playing baseball in the Army, and living through the Great Depression. Hauck’s novels, which vary from biographical fiction to war thrillers and fantasy adventure, explore the mystery, joy, and tragedy of the human experience. Born in Boise, Idaho, he resides with his wife in St. George, Utah, where he is working on his "Chronicles of the Watchers" series.