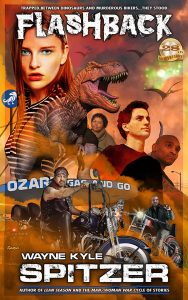 A funny thing happened to Roger and Savanna Aldiss on the Interstate. They hit a dinosaur. But that’s nothing compared to what awaits them down the road … for something is at work to reverse time itself, something which makes the clouds boil, glowing with strange lights, and ancient trees to appear out of nowhere. Something against which Roger, Savanna, and a handful of others will make their final stand.

“My God,” Savanna pleaded. “You can’t just let him be ripped to pieces …”

Omar raised an eyebrow. “No?” He slid off the table and approached her. “And why not?”

She hesitated. His face hovered in her own like some foam-latex Halloween mask—Uncle Pervis, perhaps, or Baby Stinky. “You, you just can’t,” she stammered.

He cocked his head to one side and smiled broadly, wickedly. “You ever been to prison, sugar-muffin?”

His teeth seemed covered with a yellow, pussy substance which reminded Savanna of that gummy liquid SPAM was packed in.

She shook her head.

“That’s too bad …. they’d like you there.” He stepped closer and Savanna felt his coat pressing against her breasts, the reek of liquor-sweat and pitted-out leather seeming to radiate off him in waves. “You ever heard stories about what goes on inside?”

Again, she shook her head. The glass of the window was cold against her back, as if it had frosted on the inside.

“They stick you in a little room to rot,” he said, and with the word rot came an invisible cloud of stale barley which made her eyes water and her throat want to close in on itself. “But the trick is, they don’t put you in there alone. No, they always put you in there with some shifty-eyed S.O.B. who’s crazier even then you are …” His voice had become a quavering hiss, like sparks running along a fuse. “They put you in there with some poetry-writing faggot, or some jittering crackpot who’s so hard-up for a cigarette he picks butts out of the toilet, or some darkie …”

He glanced sidelong at the cashier and menaced him with molten eyes, but the stout black man was unmoved. “… who’s built like Mike Tyson and wants you to be his joy-boy. And if that’s what he wants, that’s what he’ll get … because you’re not going anywhere. And don’t think the guards will help you, sister. Because they won’t. They’ll just walk right by whistling and swinging their keys. You’re helpless, just like you’re helpless now …”

Author Bio:
Wayne Kyle Spitzer is an American writer, illustrator, and filmmaker. He is the author of countless books, stories and other works, including a film (Shadows in the Garden), a screenplay (Algernon Blackwood’s The Willows), and a memoir (X-Ray Rider). His work has appeared in MetaStellar—Speculative fiction and beyond, subTerrain Magazine: Strong Words for a Polite Nation and Columbia: The Magazine of Northwest History. He holds a Master of Fine Arts degree from Eastern Washington University, a B.A. from Gonzaga University, and an A.A.S. from Spokane Falls Community College. His recent fiction includes The Man/Woman War cycle of stories as well as the Dinosaur Apocalypse Saga. He lives with his sweetheart Ngoc Trinh Ho in the Spokane Valley.