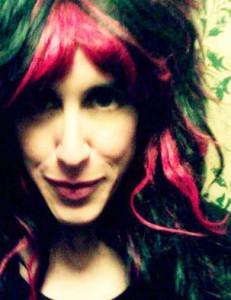 Tell us about yourself and how many books you have written.
I’m a graphic designer and branding/creative consultant by day, and an author by night. I have only one book out so far, but I’ve completed the first draft to my second, and I just started writing the third, so, soon there’ll be two or three. That way they can keep each other company. Because one book is the loneliest number.

What is the name of your latest book and what inspired it?
It’s called Vegan Teenage Zombie Huntress, and it’s a girl power story! It was written in response to Hollywood media, where it seems that women and girls very rarely get a chance to be the heroes. So I turned the tables. Also, the main character is vegan and has non-violent principles, which stands out in stark contrast to the zombies and provides plenty of comedic opportunities. She is kind of based on myself, a person who has strong beliefs and is willing to fight for them.

Do you have any unusual writing habits?
Unusual writing habits…not sure…what exactly is normal, anyway? 🙂 Because writing time is so precious to come by, I try to be comfortable writing when and where I can, even if I don’t have my laptop handy and have to use pen and paper. (I know, old school.) I do have one quirk when it comes to my writing, if you can call it a quirk— I can’t have music with lyrics on when I write. It confuses the part of my brain that’s trying to come up words. But I hate dead silence, so I use a nature sounds app on my phone that plays ocean waves. Or maybe I’ll listen to jazz. My first book was written mostly to jazz.

What authors, or books have influenced you?
Some of my fave authors are so above and beyond me in terms of skill level, so I don’t know that I can point their work and say that I’m even remotely able to emulate them. I wish I could write like J.K. Rowling, Anne Rice, Cormac McCarthy, Margaret Atwood, or Amy Tan, among many, many others. I recently discovered the works of Douglas Adams, and his hilarious philosophical take on the world around him definitely makes him someone I admire. I wish I had an ounce of his brilliance and wit.

What are you working on now?
As I hinted at earlier, I’m editing my second book and writing the third in the same series. They’re all from the perspective of other characters in the Vegan Teenage Zombie Huntress universe. That said, I’m going to drop a hint to my fans here and say that you’ll get to spend more time with a fave character from the first book. And that’s all I’m going to say, for now.

What is your best method or website when it comes to promoting your books?
I would say that just being out there in the world, either online or off, and being friendly, has its benefits. All my friends have been rallying to spread the word, and you have no idea how amazing that has been.

Also, blogging and inviting others to guest blog on my site has been helpful.

Do you have any advice for new authors?
Keep writing even when you feel it’s not going well; every step is important and improves your work.

Rejection is a good thing. It helps you examine your work more closely and pushes you to do better. Plus, it forces you into introspection: what kind of writer do you want to be?

Also, keep building a supportive community. We live in a society that doesn’t value art as much as it should, and it’s tempting to give up when others around you don’t “get it” and think you’re wasting your time. But surrounding yourself with a network of other artists will give you the strength to keep going.

What is the best advice you have ever heard?
Anne Rice will go on her Facebook page every so often and tell fans (many of whom are also writers) about her early struggles, and how her early roadblocks were from publishing industry folks who were trying to enforce “the rules”. I don’t remember exactly what she said, but ultimately she decided to follow her own rules and just be herself. I had a lot fear around just being myself as a writer, and hearing this from Anne Rice, the Queen of Horror, really put my mind at ease. Just do your thing, and your audience will find you. Better yet, they will love you and support you no matter what.

What are you reading now?
I just finished reading Lightspeed magazine’s Women Destroy Science Fiction anthology. It is, hands-down, one of the best things I have ever read. I borrowed it from a friend, but I love it so much that I’m going to buy my own copy, especially for the feminist resources at the back.

What’s next for you as a writer?
I really want to push myself harder in my short story work. I’ve been slowly working on a themed collection and have been submitting to markets. I just got an acceptance letter this morning for a dark story I’ve been nursing for a few years. Even if a story is very short, it can take many rounds of revisions and several years to get it just right. One of these days, I hope to get faster at it, but for now, it is what it is. Great writing ultimately trumps fast writing.

If you were going to be stranded on a desert island and allowed to take 3 or 4 books with you what books would you bring?
I don’t know if I could choose only 3 or 4. I think the best scenario, by far, would be to magically get stranded on an island with a library. Why choose just a few books when you can have all of them?