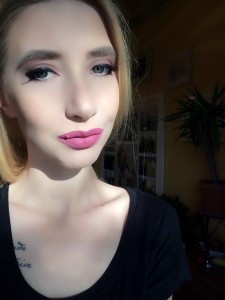 Tell us about yourself and how many books you have written.
I am a bilingual author from Slovenia. I’ve started writing at an early age, usually getting into trouble back at elementary school for writing murder or fantasy stories.

I have published my first book of poetry during my high-school years; the first book was written in Slovenian, but I have later begun to express myself in English as well.

So far, I have 12 published poetry collections (five in English, seven in Slovenian). I am also the author of The Dark Ones, the first book out of five in the Black Werewolves series, which was recently published on Amazon.

What is the name of your latest book and what inspired it?
The Dark Ones.

I have always been intrigued by Slavic mythology and wished for it to be included in (urban) fantasy books. Not finding many of those on the bookshelves, a story began to draw up in my mind. Six months later I had a finished manuscript sitting on my desk.

Do you have any unusual writing habits?
It’s not exactly a habit I chose… But one of my dogs usually comes to sit in my lap when I write, keeping me company. Sometimes both of them decide to do it at the same time. Needless to say it tends to make typing on the computer somewhat more difficult 🙂

What authors, or books have influenced you?
I wouldn’t exactly say there were any direct influences, but there are several authors and books that have stayed with me since the moment I read them. Some of those being Stephen King (his writing style is divine), the Anita Blake series by Laurell K. Hamilton (talk about a kickass protagonist), Harris’ Midnight, Texas series (because who wouldn’t want to live in that small town), Maas’ A Court of Thorns and Roses (her Fae world is mesmerising), and Nalini Singh’s Guild Hunter series (because the steamy erotica is just such a treat).

What are you working on now?
I am currently in the middle of writing The 24hourlies, the second Black Werewolves novel.

What is your best method or website when it comes to promoting your books?
I don’t have one single method. I usually post about my work on several websites, however, from time to time I also delve into creating ads on Facebook or Amazon. I have yet to try third-party promotional services. Fingers crossed the campaigns go well!

Do you have any advice for new authors?
Read the books that captivate you and write what you’d like to read yourself 🙂

What is the best advice you have ever heard?
Nothing spectacular, actually. A simple “just do what you love” did the job for me.

What are you reading now?
I am currently reading The Edge series by Ilona Andrews and The Captive Prince series by C. S. Pacat.

What’s next for you as a writer?
Finishing the second book and submerging myself in edits, while at the same time plotting the third one.

I am also playing around with the idea to write a few novellas in-between; I feel there are so many characters that deserve their own stories, so I just might begin working on them in the near future.

If you were going to be stranded on a desert island and allowed to take 3 or 4 books with you what books would you bring?
That’s a hard one. The first one would have to be The Picture of Dorian Gray by Oscar Wilde; I never get tired of reading it. The second one would probably be The Stand by Stephen King; it’s simply one of the most captivating books I have ever read. And finally, I’d take Obločnica, ki se rojeva, a play by Ivan Mrak; Mrak is undoubtedly one of my favorite authors, and although his play is short, it’s a masterpiece.