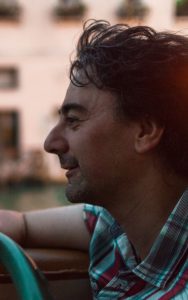 Tell us about yourself and how many books you have written.
I’m a writer and illustrator from Wales, UK. I’ve written 11 non-fiction books (of popular philosophy), two sci-fi books, and I’m a professional book cover designer and illustrator. I’m relatively new to self-publishing (the last 3 years), but what drew me to it was the freedom to write whatever I wanted – which is currently sci-fi. I’ve had an agent, and I’ve worked with traditional publishers, and it’s always frustrated me how commercial and narrow their tastes were.

What is the name of your latest book and what inspired it?
My latest book is “Pale Kings”, a little novella (about 50 pages) set in the same time and place as my full-length sci-fi novel “MUNKi”. What inspired it was actually an idea that I’d cut from the main novel, and which grew into its own story. I come from a place in the UK called Port Talbot, an industrial town where the graffiti artist Banksy recently created a work on an old garage wall. To make money from it, the garage owner actually dismantled the wall and sold it. All of which got me thinking about the craziness of the contemporary art world, and inspired me to do my own little satirical take on it all, with a smart-drugs fuelled crook and a neurotic robot guard dog thrown in for some sci-fi flavoured spicing.

Both books are set a few years in the near future, just far enough ahead that virtual reality, robots and artificial intelligence have moved along enough to make things a bit more interesting for a fledgling sci-fi writer! Near-future fiction is really tricky to write, I’ve found out to my cost. The pandemic arrived just when I was about to self-publish, and I had to delay and go back and rework bits of the main novel – not hugely, but just enough so that it was plausible that the events take place in a future affected by our present (if you get me…). So, it’s swords and sorcery or far-future space opera for me from now on, I think! 😉

Do you have any unusual writing habits?
Not especially – at least, I don’t think I do! I have found that I work best in the mornings, when my energies are fresh, so I’m quite often up before everyone else in the house, when it’s nice and quiet.

What authors, or books have influenced you?
In terms of sci-fi, it has to be William Gibson, Iain Banks and M. John Harrison. More broadly, I find David Mitchell’s work to be diverse, innovative and fresh, while at the same time an engaging read (quite a tricky thing to pull off). I’m also a big fan of John le Carré, who dispels the myth (along with Mitchell and Harrison) that you can’t write genre fiction and literary fiction at the same time.

What are you working on now?
I currently have three novel ideas that are still at the seedling stage, and I’m waiting to see which one takes off – hopefully one of them will! One is far future, another is a weird mystery thingy, and another is struggling to decide whether it’s sci-fi or fantasy. So, it’s early days!

What is your best method or website when it comes to promoting your books?
Well, as I said, I’m still relatively new to the self-publishing game, and I’m finding promotion and marketing to be the hardest part of it, because – like many writers, I suspect – I’m not an extrovert or a natural businessman! Hopefully, I’ll be able to answer this question more positively in 6 months or so. However, so far…

Free books have worked a little bit – having short stories or novellas on Amazon, especially, and the other major retailers – and this will certainly ensure that people discover you. However, it remains to be seen whether this translates into people who actually read your books (I’m beginning to suspect not…).

Taking part in newsletter promos/giveaways certainly works, and even if the majority of these sign-ups are simply freebie hunters, it does land you at least some genuine readers and potential fans – Bookfunnel.com is good in this regard, and MyBookCave.com. And obviously Booksweeps.com, but that’s a paid service.

Social media isn’t the best method for promotion, though I find Twitter good for networking with other writers and creatives.

Book review blogs are a waste of time, in my experience, as are Goodreads and LibraryThing giveaways (best just to ask for reviews at the back of your book and be patient – they will come). Reviewers are inundated, and everyone reads less than they’d like to.

Other than that, work on your newsletter, link to that in the back of your books too, and try to build a readership (at least, that is the current plan…).

Do you have any advice for new authors?
Judging by Twitter, it seems that everyone is fed up of the advice to “just write”! I can understand that, but it’s also good advice. In his book “The War of Art”, writer Steven Pressfield argues that it is “resistance” which is the main enemy of the creative person, and the only solution is to sit down and overcome it. We just put the work in. The results are out of our hands, but there is virtue and self-fulfilment in the trying.

What is the best advice you have ever heard?
I think something new writers also struggle with is self-esteem. Are you good enough? Somehow, especially if you’re a self-publisher, you have to find a way to convince yourself that you are – whilst leaving the door open a crack to allow in those insightful criticisms that will enable to you improve as a writer. To my mind (and here is my inner introvert speaking), the worst thing you can do is throw open the door and invite in everyone’s opinion. Firstly, even if well-meant (and not all of it will be…), everyone will differ in what they have to say, taste is subjective, and the advice taken as a whole will often be contradictory. Secondly, it’s much easier to be a critic than a creator; to create is to be both brave and vulnerable. Somehow, you must keep your little fragile frame of self-belief from being blown out – whether by your own inner doubts, or by the external forces of ignorance, malice and indifference – and that’s just your family and friends! 🙂

Julia Cameron, author of “The Artist’s Way”, has some good advice on this: you must create a mental inner circle of trust, and banish from it all and every internalised critical or negative voice that does not help you to create. Be brutal. No one is entitled to be in there by virtue of who they are – spouses, best friends, parents. Once you’ve done that, remember those people who have encouraged you – that teacher who said you could write, the friend who encouraged you, the compliment from that random stranger – it doesn’t need to be just about your writing, but can be any positive experience relating to qualities you can draw on for your writing. Then make those snippets, memories, and people the guardians of that inner flame of your creative self-esteem. Once that’s done, once the wall is built, then only let in those actual people whom you trust to be honest and insightful, but that also honestly want you to succeed.

I’ve waxed quite lyrical, there, but it is also good practical advice, I think. Build your mental inner circle of trust!

What are you reading now?
I am currently reading M. R. Carey’s “The Girl with All the Gifts”, which is extraordinary. I’m not a zombie fan, but I just can’t stop reading it. I’m also reading John le Carré’s “The Perfect Spy”, which fictionalises aspects of the author’s own life and his relationship with his father – it’s wonderfully subtle psychological writing.

What’s next for you as a writer?
Next for me is to decide which of my seedlings to develop! I know I should really write a series (as all the advice has it), but life’s too short to pander to the market. So I’ll see where my interests lead me. I also need to find means to support my writing – which I’m trying to do through my book cover design and illustration work. Wish me luck!

If you were going to be stranded on a desert island and allowed to take 3 or 4 books with you what books would you bring?
This is tough! I have an enormous amount of book guilt – that is, regarding those I own that I haven’t yet read. However, as I get older, I’m also discovering the joy of re-reading. So, I would probably take the complete works of Shakespeare (because there’s just so much wonderful stuff in there), Thomas Pynchon’s “Gravity’s Rainbow” (because then maybe I could actually finish the bloody thing), Edward Gibbon’s “Decline and Fall of the Roman Empire” (because Rome fascinates me, and there are so many lessons and stories in there), and the complete writings of the philosopher Friedrich Nietzsche – if I’m allowed (because as well as a philosopher, he was a wonderful writer, and while I disagree with him on many things, every time I read him I find something different and thought provoking).