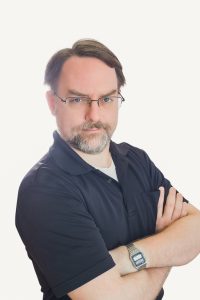 Tell us about yourself and how many books you have written.
Telling you about myself is difficult. There are so many things–enough to fill a book. How do you describe a person in a hundred words or less? Let’s take a crack at it.
Tall, amused, sardonic, sarcastic, and helpful. Quick of wit, slow of anger, easygoing, and relentless. Scorpio with some Zen and an overabundance of imagination.
A couple of centuries ago, I’d have been burned as a witch or a heretic. If they could catch me.
I’ve written five books so far–one sci-fi novel, “Luna,” and the first four books of the “Nightlord” series: “Sunset,” “Shadows,” “Orb,” and “Knightfall.” “Knightfall” isn’t out, yet; it’s in the final edits before I send it to the audiobook people.

What is the name of your latest book and what inspired it?
“Knightfall.” It’s the fourth book in the “Nightlord” series.
As for inspiration, I’d have to say it was the first three that inspired the fourth. That, and entirely too many people in my head demanding to be put into a story.
Oh, and a powerful need to eat.

Do you have any unusual writing habits?
My most unusual writing habit is the tendency to not do anything else. I wake up, I make the grueling trek to my office–ten, twelve steps, something like that–and sit in front of my computer, keyboard clicking, until I notice I’m hungry. Then I eat, maybe start some laundry, and go back to writing.
Eventually, I get too tired to write. Then I go to bed and start over.
This process makes my hours a bit… unpredictable. I’ve woken up at seven in the evening, worked until noon the next day, and gone to bed until midnight.
It may be weird, but it seems to work.

What authors, or books have influenced you?
Oh, my. There’s quite a list.
Isaac Asimov, Ray Bradbury, E.E. “Doc” Smith, Roger Zelazny, Robert Heinlein, Steven Brust, Julian May, C.S. Lewis, J.R.R. Tolkien, Robert Silverberg… I could go on and on.

What are you working on now?
“Knightfall.” This fourth book in the “Nightlord” series picks up where “Orb” left off and sees our narrator/protagonist coming to grips with enemies he’s made, problems he brought on himself, and the difficulties of being a king… as well as the difficulties of *not* being a king.
“You can’t win for losing,” I believe the phase is.
Or can you?

What is your best method or website when it comes to promoting your books?
Promoting? Uh… I don’t know.
I suffer from what I believe to be a fairly common problem for a writer. I write stuff. I don’t know how to promote or market or advertise or whatever. Moreover, I don’t want to. I just want to sit in my darkened little room, alone with my thoughts and my stories, and push books out into the world in exchange for electricity and food. Is that too much to ask?

Do you have any advice for new authors?
Being a writer is the most glorious torture. You will love the agony. It’s not for the faint of heart, as you may have guessed. It involves bleeding into a story to give it life. It means putting a piece of yourself into words and releasing it to rise or fall on it’s own merits–always remembering, however, that it is a piece of you. People will love it… and hate it. And you will be tempted to take these feelings as a judgment on you, rather than on your story.
Write anyway.

What is the best advice you have ever heard?
You can have peace. Or you can have freedom. Don’t ever count on having both at once.

What are you reading now?
Edward Gibbon’s “The History of the Decline and Fall of the Roman Empire”

What’s next for you as a writer?
A lot of screaming and hair-tearing as I edit “Knightfall.” After that, more screaming as I edit “Dragonhunters,” a fantasy novel about a group of would-be dragonslayers who go into a dragon’s lair… and lose. Badly. The short story is on Amazon, of course, but that’s only chapter two…
Then it’s off to the races with the next book in the “Nightlord” series! (Before someone who’s read Steven King’s “Misery” gets too anxious for it.)

If you were going to be stranded on a desert island and allowed to take 3 or 4 books with you what books would you bring?
“Basic Survival”
“Fishing for Dummies”
“How to Build a Boat”
“Principles of Navigation”
I’m going to need them in order to get back to civilization so I can get back to writing!