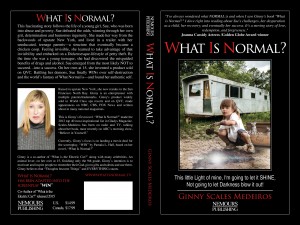 Tell us about yourself and how many books you have written.
Ginny Scales Medeiros was raised in upstate New York and now resides in the San Francisco North Bay. Ginny is an entrepreneur with multiple patents/trademarks. Ginny’s product widely sold in World Class spa resorts and on QVC, made appearances on NBC, CBS, FOX News and written about in many national magazines. This is Ginny’s first novel. “What Is Normal?” made the 2012 top 40 most inspirational list in Gladys Magazine. Scales-Medeiros has been on radio and TV, talking about her book, most recently on ABC’s morning show, “Believe in Yourself.” Currently, Ginny’s focus is on landing a movie deal for the screenplay, “WIN”, based on her novel, “What Is Normal?” Ginny is a co-author of “What is the Electric Car?” along with many celebrities. An animal lover, on her own at 15, finishing only the 9th grade, Ginny’s intention is to motivate and inspire people to remember their God-given gifts and talents and use them. Ginny believes that “Thoughts become Things” and EVERYTHING counts.

What is the name of your latest book and what inspired it?
What is Normal? is inspired by my life. Book Trailer https://youtu.be/p1h0AX1ADjk
.I want to use my story to help others stuck in a funk, because they believe their not worthy of love or happiness. I get many who say “What is Normal?” has inspired them, to do what they know they are in the world for. *I just recieved a letter from someone who made a move towards his calling after reading my book.
Enjoy and I would love to hear from you after you read it.
blue skies,
Ginny

What authors, or books have influenced you?
Augustan Burroughs Running with Scissors, Dry

What are you working on now?
Currently, my focus is on landing a movie deal for the screenplay, “WIN”, based on her novel,

Do you have any advice for new authors?
Do not follow the rules

What is the best advice you have ever heard?
Do NOT follow the rules.. or you will not stick out

What are you reading now?
Seth Speaks

What’s next for you as a writer?
Book tour

If you were going to be stranded on a desert island and allowed to take 3 or 4 books with you what books would you bring?
Seth Speaks, God Calling, The little engine that could